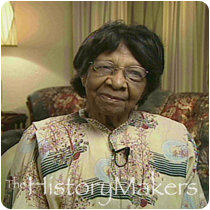 "Be Obedient To Your Parents"

Beautician, beauty shop owner, painter, and sculptor Louisiana Hines was born on April 13, 1898, in Luverne, Alabama, to Callie and Ben Summerlin; both of her parents were born into slavery. Hines' father was a sharecropper, south of Montgomery, Alabama, in Crenshaw County, and her mother was a homemaker. Hines was the second of seven children who lived and worked on property where her family were sharecroppers.

Hines married the late Arthur Hines and moved to Avon Park, Florida. During the Great Migration of the 1930s and 1940s, the Hines family moved to Detroit, Michigan to seek better social and economic opportunities. Hines worked on airplanes as a riveter during World War II in 1946, before enrolling in Bee Dew Beauty College and receiving her beauty culture license in 1947. In 1948, Hines opened her own salon called L. Hines Beauty Shop in Detroit. Hines had a natural talent for clothing design and taught herself how to sew at an early age. She was an accomplished, self-trained seamstress, being able to make clothing without using patterns. Hines also found ways to express her creativity through painting and wood carving.

At over 113 years old, Hines maintains memberships in numerous civic and social community service groups, including Amvets Auxiliary, the National Association for the Advancement of Colored People, the Order of the Eastern Star Prince Hall Affiliation and the Red Hat Society. Hines is one of two centenarians featured in two chapters of a book entitled "If I Live to be 100: Lessons from the Centenarians (2004)" by Neenah Ellis, which has been published in several languages. Hines resides in Detroit, where she is a member of Hartford Memorial Baptist Church and a member of the April Birth Month, All States Club, Hartford Women United and Mothers’ Board ministries.

Louisiana Hines was interviewed by The HistoryMakers on June 30, 2007.

Louisiana Hines passed away on February 1, 2013.