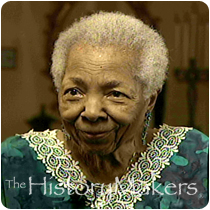 See how Louise Hope is related to other HistoryMakers
Donate Now

Educator and arts advocate Rhoda Louise Meredith Kent-Hope was born on January 15, 1915 in Newton, Kansas. She is the only child of Annie Mae and Paul Matthew Meredith. She earned her B.S. degree in music from the University of Wichita in Wichita, Kansas in 1936 and her M.S. degree in music education from Case Western Reserve University in Cleveland, Ohio in 1946. She also completed additional coursework in reading, language arts, mathematics, classroom organization and behavior management.

Kent-Hope was a teacher in Cleveland Public Schools from 1951 to 1977. From 1974 to 1977, she led teacher workshops at Cuyahoga Community College, and from 1987 to 1994, she taught piano and music appreciation at the Cleveland Music School Settlement. In 1990, Kent-Hope and other educators joined the Great Lakes Theater Festival in launching the Adrienne Kennedy Society. In addition to celebrating the genius of an African American playwright, the Society provided mentoring programs for elementary and secondary school students. In 1993, Kent-Hope co-founded (along with June Sallee Antoine) Creative Writing Workshop Projects, a non-profit arts education and student-mentoring program.

Kent-Hope was the recipient of numerous awards and honors, including Teacher Leader Grants from the Martha Holden Jennings Foundation and a grant from the Pace Program for Action by Citizens in Education. She was active in civic affairs, including the Women’s City Club, the Musical Arts Association of the Cleveland Orchestra, and the Council of Human Relations. She held life memberships in Delta Sigma Theta Sorority, Inc. and the NAACP, and she also belonged to the Urban League of Greater Cleveland and the United Church of Christ.

She was the mother of two daughters, Julia Carlyne and the late Anita Louise Kent. Twice widowed to Morehouse classmates, her first husband was Dr. Carl Owen Kent, a physician in Cleveland, Ohio for over thirty-five years, and her second husband, an engineer, Dr. Edward Swain Hope, Ph.D.

See how Louise Hope is related to other HistoryMakers
Donate Now