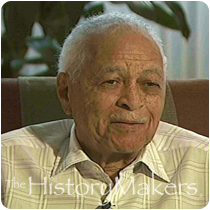 See how Louis Rabb is related to other HistoryMakers
Donate Now

As a student at Tuskegee, Rabb met Dr. George Washington Carver, Dr. Charles Gomillion, P.H. Polk and Tuskegee president Dr. Robert Russa Moton. Rabb graduated from Tuskegee High School in 1931, and enrolled in college at Tuskegee University. While at Tuskegee, Rabb became friends with Ralph Ellison, Albert Murray and his future wife Marianna Hutcherson. He and Marianna married in 1938. Rabb became a staff member of Tuskegee University after earning his B.S. degree in business administration, and served as the secretary of labor for three years. He received a sponsorship from Tuskegee University to pursue a masters degree from Columbia University, where he earned a M.A. in personnel administration in 1942. Tuskegee also sponsored his Masters in Health Administration degree from Northwestern University in 1948, and appointed Rabb as the administrator of John Andrew Hospital. He later oversaw the transition of John Andrew Hospital to the Tuskegee Bioethics Center.

Rabb served as assistant to the president and secretary of Tuskegee’s Board of Trustees for twenty-eight years under Dr. Luther Foster, from 1953 to 1981, when he retired from Tuskegee University. He passed away on April 23, 2015 at the age of 101.

Louis A. Rabb was interviewed by The HistoryMakers on July 8, 2006.

See how Louis Rabb is related to other HistoryMakers
Donate Now
Click Here To Explore The Archive Today!