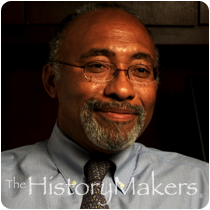 See how Louis Jones is related to other HistoryMakers

Louis Jones is president of Louis Jones Enterprises, Inc. and serves on the Board of Directors for the Black Contractors United. He was born on July 1, 1946 in Hunstville, Alabama to Arthur and Alberta Jones. His father was a farmer and construction worker in the South, but when his family moved to Chicago his father became a baker with the A&P grocery chain factories. Jones attended Tilden Technical High School before earning his Bachelor of Architecture degree from the University of Illinois at Chicago Circle in 1973. In 1969, Jones began working for Skidmore, Owings and Merrill architects. In 1973, Jones began working for McKee-Berger-Mansueto as a School Rehab Manager.

In 1975, Jones became a licensed architect and moved to San Francisco, where he worked for a private consulting firm. He moved back to Chicago three years later and began working for Schal Associates. Between 1978 and 1984, Schal Associates built the Avondale Center, Madison Plaza, the Chicago Tribune Printing Plant, and the Magnificent Mile. In 1984, Jones became president of Louis Jones Enterprises, Inc., specializing in engineering, construction, management, consulting, and architecture. The following year, Louis Jones Enterprises, Inc. was part of the $1.7 billion renovation and expansion of O’Hare International Airport. The firm also was hired to work on Provident Hospital in 1990 and McCormick Place in 1997. In 2008, Jones' firm was hired to be part of the team to build the University of Illinois’, the James Stukel Towers student housing complex.

Since 1986, Jones sat on the Board of Directors for Black Contractors United and was elected Chairman of the Board in 1998. He was also selected to serve on the Mayor of Chicago’s Task Force for Minority & Women Business Development in 2005. Jones was a member of the Illinois Capital Development Board and has served as president pro tempore of the Illinois Department of Employment Security Advisory Board.

Louis Jones was interviewed by The HistoryMakers on May 27, 2010.

See how Louis Jones is related to other HistoryMakers
Click Here To Explore The Archive Today!