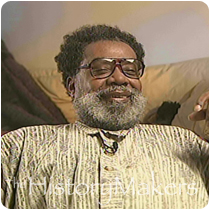 See how Louis Johnson is related to other HistoryMakers

Director and choreographer Louis Johnson was born on March 19, 1930, in Statesville, North Carolina, but moved with his parents to Washington, D.C., at an early age. Although Johnson became quickly known in the Washington, D.C., school system for his outstanding artistic talents, he also developed a strong following for his gymnastic and dancing talents. In high school, he enrolled and trained at the Jones Haywood School of Dance, where he and such notable students as Chita Rivera blossomed under the tutelage of Doris Jones and Clair Haywood.

After being advised to move by his teachers to New York City, Johnson found himself at the famed New York City School of American Ballet, where he was mentored by Jerome Robbins and George Balanchine. These associations led directly to a performance with the New York City Ballet Company and then on to Broadway shows such as Four Saints in Three Acts, House of Flowers (choreographed by George Balanchine), Damn Yankees (by Bob Fosse) and Hallelujah Baby. His public acclaim in these Broadway performances led to an offer to choreograph his ballet, Lament for the New York City Ballet Club. That success, in turn, led to him receiving an offer to choreograph the Broadway production Black Nativity by Langston Hughes. Johnson also choreographed Lost in the Stars, Treemonisha and Purlie, for which he received a Tony nomination.

Johnson has received the great acclaim for choreographing operas performed by the New York Metropolitan Opera. Those operas include La Giaconda, starring Martina La Rowa and Aida, which starred Leontyne Price. In movies, he choreographed Cotton Comes to Harlem and The Wiz, starring Michael Jackson and Diana Ross. In addition to his work in New York City, Johnson has mounted ballets for the Cincinnati Ballet, the Alvin Ailey American Dance Theatre, the Joffrey Ballet, Philadanco Dance Company, the Dance Theatre of Harlem, and the Atlanta Ballet Company. In 1980, he started Henry Street Settlement’s Dance Department in New York City. He continued to work there until 2003. He also taught the first Black theatre course at Yale University and started Howard University’s Dance Department in Washington, D.C.

Johnson’s honors include: the Pioneer Award from the International Association of Blacks in Dance at the Kennedy Center in Washington, D.C.; an honor from the California chapter of the NAACP for his work with the original Negro Ensemble Company; and a special night honoring him from Ashford and Simpson. His directorial credits include Porgy and Bess, Miss Truth, Jazzbo Brown, Time in the Wind and Ebony Game.

See how Louis Johnson is related to other HistoryMakers
Click Here To Explore The Archive Today!