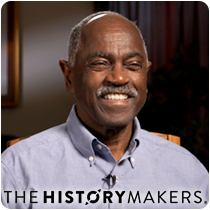 See how Louis E. Wilson is related to other HistoryMakers

Professor Louis E. Wilson was born on March 1, 1939 in Longview, Texas. Wilson earned his B.A. degree from California State University. He went on to receive his M.A. degree and Ph.D. degree in 1980 from the University of California, Los Angeles.

Wilson joined the faculty at the University of Colorado Boulder in 1980. During his term, he was also a senior Fulbright Scholar at the University of Ghana, Legon. In 1989, he was named chair of the Afro-American and African Studies Department at Smith College in Northampton, Massachusetts. There, he also served as associate professor, and later was appointed professor of African and African American history. In 1991, Wilson authored The Krobo People of Ghana to 1892: A Political and Social History and later co-authored the textbooks, America Will Be: Houghton Mifflin Social Studies in 1997, and This Is My Country. In 1999, Wilson served as a senior Fulbright history professor and researcher at the University of Cape Town in South Africa. He then co-authored The Americans: Reconstruction Through the 20th Century and The Americans in 2002. In 2012, Wilson was a co-author for the History Channel History Education and History Classroom programs in partnership with textbook publisher Houghton Mifflin Harcourt. He was also the author of Genealogical and Militia Data on Blacks, Indians, and Mustees from Military American Revolutionary War Records in 2003, and a book entitled Forgotten Patriots: African Americans and Native Americans in the American Revolution from Rhode Island. In 2017, Wilson was named professor and chair of the Africana studies department at Smith College. The following year, The Louis Wilson collection of maps of Africa from 1665 to 1906, were housed in the Five College Archives and Manuscript Collection at Smith College.

Wilson served as a visiting professor of American Studies at the University of Hamburg in Germany. He was also a member of the board of trustees of the Museum of African American History in Boston, Massachusetts. Wilson received The Blackwell Fellowship and Prize as Outstanding Black New England Scholar from the American Library Association in 1991.

Louis E. Wilson was interviewed by The HistoryMakers on December 7, 2018.

See how Louis E. Wilson is related to other HistoryMakers