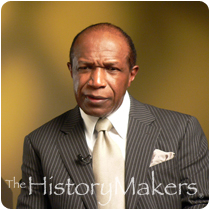 See how Louis Dodd is related to other HistoryMakers

Insurance executive Louis Price Dodd was born on February 15, 1944, in Winona, Mississippi, to Willie and Corene Dodd. Dodd graduated valedictorian from Chicago’s Dunbar Vocational High School in 1959. He received his B.A. degree in education from Chicago State University in 1963 and has also taken advanced courses at Northeastern Illinois University.

Dodd worked as a Language Arts teacher for the Chicago Board of Education from 1966 to 1971 and was the Director of General Education for Chicago Youth Centers from 1969 to 1971. During this same time period, he was also the Co-Owner and Vice President of Marketing for Bailey’s Stamp Works. Since 1971, Dodd has been in the insurance business as an independent agency affiliate of Allstate Insurance. Throughout this time, he has been president and CEO of Dodd’s Insurance Agency. Dodd has received numerous awards for his work in the insurance industry and has been Allstate’s leading sales agent for the Chicago Metro Region for over fifteen years. From 1977 through 2003, Dodd was the director of Highland Community Bank in Chicago. Building on his success in the insurance industry, Dodd entered the hotel business and is co-owner of three Chicago hotels, The Amber Inn, The Dew Central Motel, and the South Parkway Inn. He is also a partner in two other enterprises, the Rolls Royce Car Wash and Kermit Coleman Medical Center.

See how Louis Dodd is related to other HistoryMakers
Click Here To Explore The Archive Today!