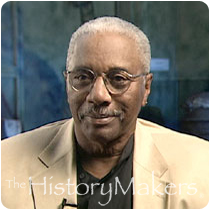 See how Louis Dinwiddie is related to other HistoryMakers

Pioneering radio broadcaster Louis Dinwiddie was born on October 29, 1935, in St. Louis, Missouri, and grew up as an only child in Fort Wayne, Indiana. His father, James Arthur Dinwiddie, was a trumpet and saxophone player who traveled all over the country.

The only African American in his parochial school, Dinwiddie helped lead Central Catholic High School to a state championship in 1950. He spent four years in the United States Air Force after graduating and then moved back to Fort Wayne. After working in a steel mill for over six years, he sold insurance for Chicago Metropolitan Life. Enjoying sales, Dinwiddie moved into retail. He opened a clothing store in 1970 that successfully catered to both blacks and whites, selling trend-setting fashions for years. However, a bank denied him a loan to buy his fall merchandise, forcing Dinwiddie to close the shop.

The booming cable television industry inspired him to learn about cable radio and he entered the industry headfirst. The station's urban format included gospel music on Sunday mornings, blues on Saturday afternoons, heavy soul and news geared to an African American audience. In 1990, the station that Dinwiddie built from the ground up switched from cable to an FM frequency. WJFX continued to broadcast the original urban programming until 1999, when Dinwiddie sold it. Now retired, Dinwiddie still lives in Fort Wayne.

See how Louis Dinwiddie is related to other HistoryMakers
Click Here To Explore The Archive Today!