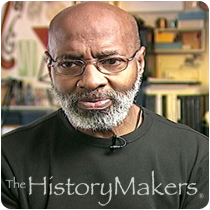 Favorite Color:
None
Favorite Food:
Cake (Pound)
Favorite Time of Year:
Spring
Favorite Vacation Spot:
None
Favorite Quote:
Do everything as if it's the last thing that you're going to be doing

Favorite Color:
None
Favorite Food:
Cake (Pound)
Favorite Time of Year:
Spring
Favorite Vacation Spot:
None
Favorite Quote:
Do everything as if it's the last thing that you're going to be doing

See how Lou Stovall is related to other HistoryMakers

World-renowned printmaker and artist Lou Stovall has helped build a thriving artistic community in the nation's capital. Born in Athens, Georgia, on January 1, 1937, Stovall grew up in Springfield, Massachusetts, before founding a printmaking company, Workshop, Inc.

After graduating from high school in 1962, Stovall moved to Washington, D.C. He earned a B.F.A. from Howard University in 1965. While there, Stovall was influenced by his teachers to give back to his community and to share his wisdom with young artists. In 1968, Stovall started Workshop, Inc. as a small, active studio concerned mainly with community posters. Under Stovall's leadership, Workshop, Inc. has evolved into a professional and highly respected printmaking facility.

A master printmaker by trade, Stovall has been commissioned to print works from a number of artists. His passion, however, remained drawing. Stovall has produced drawings and prints for several special occasions. One of his best-known works, "Breathing Hope," was commissioned for the inauguration of Howard University President H. Patrick Swygert. In 1982, First Lady Nancy Reagan asked Stovall to design the Independence Day invitation for the White House. Washington Mayor Marion Barry commissioned Stovall in 1986 to create "American Beauty Rose" for the city's host committee for the 1988 Democratic National Convention. Stovall's prints and drawings have found homes in several public and private collections around the world.

Stovall's efforts to build a community of artists in Washington extended beyond the opening of his studio. Stovall has provided apprenticeships to several young artists in the city. In 2001, he served as a juror for the Howard University Student Art Exhibition.

See how Lou Stovall is related to other HistoryMakers
Click Here To Explore The Archive Today!