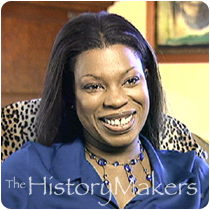 See how Lorraine Toussaint is related to other HistoryMakers

Actress Lorraine Toussaint was born April 4, 1960, in Trinidad, in the West Indies. At the age of ten, her family relocated to New York City, where a young Toussaint was intrigued when she came upon a large ad in the telephone book for a theater school. Finding her calling in the performing arts, Toussaint attended the renowned High School of Performing Arts and then went on to attend the Juilliard School.

Toussaint landed her first paying acting job on the day she received her diploma from Juilliard, playing Lady MacBeth with “Shakespeare & Company” in New York. She spent the next twelve years on stage in New York before moving to Los Angeles to pursue a career in film and television. Her decision to move proved right, with Toussaint landing numerous roles on a variety of television programs, including recurring roles on Law & Order and Murder One and regular lead roles on Leaving L.A., Where I Live and Amazing Grace. She also appeared in numerous made-for-television movies, including the mini-series Queen based on the novel by Alex Haley.

Toussaint starred for four seasons on the Lifetime Television drama Any Day Now as Rene Jackson. Her work on the program garnered her four NAACP Image Award nominations for Best Actress in a Drama Series; a T.V. Guide Award nomination; and a Wiley A. Branton Award from the National Bar Association. Toussaint has also appeared in a number of films, including Point of No Return, starring alongside Bridget Fonda and Dangerous Minds, with Michelle Pfeiffer. Toussaint has also appeared on the television series Crossing Jordan, Judging Amy, The Closer and CSI: Crime Scene Investigation. She also appeared in the made-for-television movie version of Zora Neale Hurston’s Their Eyes Were Watching God with Halle Berry and Ruby Dee.

See how Lorraine Toussaint is related to other HistoryMakers
Click Here To Explore The Archive Today!