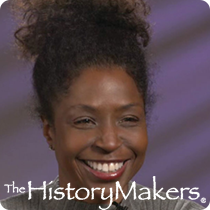 See how Lorna Simpson is related to other HistoryMakers

Photographer Lorna Simpson was born on August 13, 1960, in Brooklyn, New York to Elian and Eleanor Simpson. She graduated from the High School of Art and Design in Manhattan; and earned her B.F.A. degree in photography from the School of Visual Arts in New York City in 1983, and her M.F.A. degree in visual arts from the University of California, San Diego in 1985.

Simpson held her first solo exhibit in 1986 at the Just Above Midtown Gallery in New York. She went on to form a partnership with the Josh Baer Gallery in 1989; and, in 1990, she exhibited at the Museum of Modern Art as part of the Projects 23 exhibit series. Simpson’s 1992 solo exhibit Lorna Simpson: For the Sake of the Viewer was displayed at the Museum of Contemporary Art in Chicago. She also had a series of solo shows at both the Sean Kelly Gallery and Salon 94 in Manhattan. In 1996, Simpson served as artist-in-residence at the Wexner Center for the Arts in Columbus, Ohio, where she developed her first film piece Interior/Exterior, Full/Empty. In 2013, Simpson became the artist-in-residence at the Addison Gallery of American Art in Andover, Massachusetts, and held an exhibition of drawings entitled Lorna Simpson: Works on Paper at the Aspen Museum in Aspen, Colorado.

Simpson’s photographic work includes The Waterbearer, Necklines, 1978-1988, Wigs, the “Public Sex” series, Photo Booth, and 1957-2009; and her film work includes Interior/Exterior, Full/Empty, Call Waiting, Duet, 31, and Chess. Simpson’s work has been published in several exhibit catalogues, including: Untitled 54 (The Friends of Photography): Lorna Simpson, Lorna Simpson: For the Sake of the Viewer, Lorna Simpson: Interior/Exterior, Full/Empty, Lorna Simpson, and Lorna Simpson: Works on Paper. Her work has also been displayed in museums around the world, including the Guggenheim Museum, Irish Museum of Modern Art, Consejo Nacional Para la Cultura y las Artes, the Studio Museum in Harlem, Jeu De Paume, and the Whitney Museum of American Art. Simpson’s work is included in the collections of the Museum of Modern Art, the Museum of Contemporary Art, and the Whitney Museum of American Art, among others.

Simpson and her husband, photographer James Casebere, have one child named Zora.

Lorna Simpson was interviewed by The HistoryMakers on December 13, 2016.

See how Lorna Simpson is related to other HistoryMakers