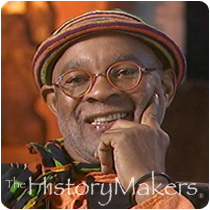 See how Lorenzo Pace is related to other HistoryMakers
Donate Now

Artist Lorenzo Pace was born September 29, 1943, in Birmingham, Alabama, moving to Chicago as a teenager. Pace grew up in a strict environment. His father was a Church of God in Christ minister who had hoped the young Lorenzo would follow in his footsteps. Pace had other ideas. He wanted to explore and the city he chose was Paris, France. There, the world of art opened up to him and after a year's stay, he returned to Chicago interested in learning the craft of woodcarving. He showed great promise.

During his first exhibition at the South Side Community Arts Center, a dean from the University of Illinois was so impressed by Pace's wooden masks that he encouraged the young artist to enroll in art school. Pace then attended the School of the Art Institute of Chicago, where he graduated with both a B.F.A. and an M.F.A. He went on to receive a doctorate in art education from Illinois State University in 1978. Pace later moved to New York, like many other artists, seeking a more supportive artistic environment.

In 1993, Pace and his work gained national attention when he was commissioned to build a monument at New York City's Foley Square paying homage to the African slaves originally buried on that site. In 1991, the remains of more than 400 African slaves were excavated during the construction of a federal building in the city's financial district. The city of New York wanted to create a memorial and Pace was chosen to make it. His work resulted in a beautiful 300-ton granite sculpture, Triumph of the Human Spirit. However, Pace and other African Americans generated controversy when they boycotted the unveiling ceremony because the day chosen was Columbus Day.

Throughout his career, Pace has worked with a broad range of objects and materials. His sculptures, installations and performance art have received international acclaim and he has exhibited in galleries and museum all over the world. He presently maintains a studio in Brooklyn and serves as director of the Montclair State University Art Gallery.

Pace was interviewed by The HistoryMakers on December 17, 2000.

See how Lorenzo Pace is related to other HistoryMakers
Donate Now
Click Here To Explore The Archive Today!