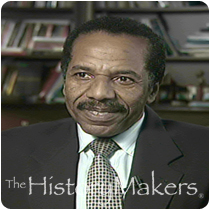 See how Lorenzo Morris is related to other HistoryMakers

Political science professor Lorenzo Morris, chair of the Political Science Department at Howard University, and author and consultant on international and American public policy and electoral behavior, was born in Poughkeepsie, New York, on October 27, 1946. Morris’s parents, Annie Leola Crouch Morris and Henry Grady Morris, Jr. moved to Poughkeepsie from Columbus, Georgia, before Morris was born. Morris received his early education in Poughkeepsie public schools before continuing his studies at Fisk University, Oberlin College, and Yale University; he received his Ph.D. and M.A. degrees in political science from the University of Chicago.

In addition to his position at Howard University, Morris’s academic career included teaching at the Massachusetts Institute of Technology, a research fellowship at the Brookings Institution, and an appointment as a Senior Fellow in the Institute for the Study of Educational Policy. Outside of academia, Morris often provided commentary on public affairs for television and radio; he was the author of five scholarly books on race and presidential politics, higher education policy, and party politics as well as numerous articles on political matters including African American politics, and questions of race in American public policy. Internationally, Morris consulted on educational projects in Haiti, Botswana and Indonesia and on matters of electoral participation in Benin and Senegal. As part of the U.S. delegation to Haiti in 1990, Morris advised and observed during the election.

See how Lorenzo Morris is related to other HistoryMakers
Click Here To Explore The Archive Today!