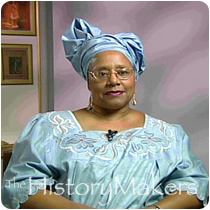 See how Lois Conley is related to other HistoryMakers

Museum chief executive Lois Diane Conley was born in St. Louis, Missouri on July 29, 1946. Conley was born to Leo and Emma Conley, as the second oldest of eight children. Conley attended St. Louis’s Waring Elementary School and Vashon High School. After graduating from high school in l964, Conley attended Saint Louis University where she earned her B.A. degree in communications and her M.A. degree in education.

While researching the black history of St. Louis, Missouri, Conley discovered that notable African Americans, like Madame C.J. Walker and Miles Davis influenced St. Louis history. She became inspired to memorialize their impact and went back to school for museum studies. Conley earned a graduate certificate in museum studies from the University of Missouri-St. Louis in 2001 and founded The Griot Museum of Black History and Culture, the second African American history wax museum in the country. The museum was initially named the Blackworld History Wax Museum, and has since gone through several names before settling on The Griot Museum of Black History and Culture. Under Conley's leadership the museum's exhibitions have expanded beyond just wax sculptures to include a slave ship replica.

Lois Conley was interviewed by The HistoryMakers on October 19, 2007.

See how Lois Conley is related to other HistoryMakers
Click Here To Explore The Archive Today!