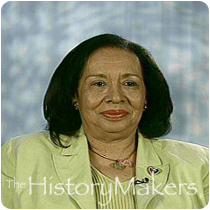 See how Loann Honesty King is related to other HistoryMakers

King began a highly respected career as a teacher and counselor in the Chicago Public Schools in 1963, and became a program development consultant for the U.S. Department of Education in 1976. Her dedication to youth enrichment continued as she became the Associate Director of Jobs for Youth Chicago in 1980. She also worked as a grant coordinator for the Illinois Community College Board, Malcolm X College and City-Wide College. Committed to the growth of Chicago-area community colleges, King served in several capacities at Olive-Harvey College beginning in 1987, including serving as Dean of Instruction and Dean of Career Programs. She moved on to become Dean of Instruction at Kennedy-King College in 2001, where she also served as Vice President of Student Services and Enrollment Management. She retired from her position as Vice President at Kennedy-King in 2003.

King is a dedicated member of Alpha Kappa Alpha Sorority, Inc. She was initiated into the Beta Chapter in Chicago in 1959. She serves as Chairman of the International Program Committee and has also authored two editions of a history of the Sorority’s Central Region. She also served the Sorority as National Treasurer and Central Regional Director, among many other positions. She is also a member of The Links, Inc.

King has sat on the boards of numerous community organizations including the Jane Adams Hull House Foundation, Parkway Community House (served as President) and the HRDI (Human Resources Development Institute). She currently serves on the boards of the Chicago Community Trust African American Legacy Initiative (founding member) and Urban Prep Academies, where her son Timothy is the founder and CEO. She has been honored extensively, by organizations such as Ebony Magazine, the U.S. Department of Education, Englewood High School Alumni Hall of Fame, Olive-Harvey College, Kennedy-King College, the American Association of Women in Community Colleges, and the University of South Carolina and Houghton Mifflin.

King was interviewed by The HistoryMakers on February 6, 2008 as part of the Alpha Kappa Alpha Sorority’s Centennial Boulé 2008 100 year celebration. Segments of these interviews were used in a DVD entitled A.K.A. Sorority: A Legacy of Supreme Service.

See how Loann Honesty King is related to other HistoryMakers
Click Here To Explore The Archive Today!