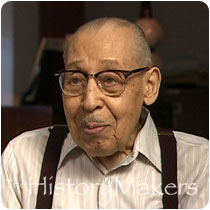 See how Lloyd Wheeler is related to other HistoryMakers

Lloyd Wheeler is the benefactor of a tremendous family history. As a child, his grandfather, Llyod G. Wheeler, the first African American lawyer in Chicago, took him to visit one of his close friends, Booker T. Washington, in Tuskegee, Alabama. His great grandfather was Chicago businessman John Jones. Jones, during his time, was one of the wealthiest African Americans in the City of Chicago. Lloyd Wheeler was born on August 26, 1907, in St. Joseph, Missouri. During his early childhood, Wheeler's mother, Madge, stayed home with the five Wheeler children while his father, Hiram, worked as a teacher. His family later moved to Urbana, Illinois, where he attended Lincoln Grade School and Urbana High School.

Following graduation, Wheeler attended the University of Illinois in Chicago where he received his B.S. in accounting in 1932. He spent his summer vacations from high school and college working in Chicago at the Liberty Supreme Life Insurance Company. The company, which was black owned and operated, primarily served the Chicago black community from its Bronzeville neighborhood headquarters. Wheeler began his career with Liberty Supreme in 1923 as a mail boy. Wheeler's sixty-eight year career with Liberty Supreme culminated with his appointment in 1980 as CEO. Wheeler served eleven and half years as CEO, retiring in 1991. His tenure at the company was interrupted for a short time by service in the United States military during World War II.

Wheeler was a member of the Kappa Alpha Psi Fraternity, the Chicago Assembly and the Original 40 Club. Wheeler passed away on April 30, 2005.

See how Lloyd Wheeler is related to other HistoryMakers
Click Here To Explore The Archive Today!