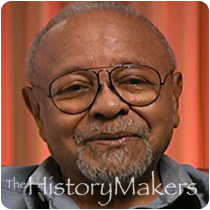 See how Lloyd Richards is related to other HistoryMakers

Actor and director Lloyd Richards was born on June 29, 1919 in Toronto, Canada. His father, a Jamaican “Garveyite” master carpenter, moved the family to Detroit in search of a job at Henry Ford’s automobile plant. However, misfortune struck early when his father died unexpectedly and Richards and his older brother took odd jobs to keep the family afloat.

After high school, Richards enrolled in pre-law at Wayne State University, but he found that his real interest was in acting and radio programming. After fighting in World War II, he returned to Detroit and remained active in local theater and broadcasting. In fact, he became part of a local theater troupe and was hired on air as a radio announcer. In the 1950s, Richards moved to New York City hoping to make his mark. He supported himself by working several jobs, doing plays and television spots, and eventually worked as an acting coach. In the late 1950s, friend Sidney Poitier asked Richards to direct a play, A Raisin in the Sun, by a then-unknown black playwright, Lorraine Hansberry. It was Broadway’s first play by a black woman and he was its director.

Always committed to teaching, in the wake of Raisin, Richards began as a drama instructor at New York University School of the Arts and Hunter College. Later, he became director of the National Playwrights’ Conference at the O’Neill Theater and the dean of the prestigious Yale School of Drama and artistic director of the Yale Repertory Theatre. It was in these capacities that Richards influenced the careers of many playwrights and actors, including Athol Fugard, August Wilson and James Earl Jones. With Wilson he developed a lasting partnership as Richards went on to direct and produce the first seven of Wilson’s plays to reach Broadway. Richards won a Tony in 1986 for his direction of Wilson’s play, Fences.

Richards was a professor emeritus at the Yale School of Drama and served on several artistic and theatrical boards, including the National Endowment for the Arts. Richards received numerous awards, including several honorary degrees, and was inducted into the Theater Hall of Fame.

Lloyd Richards was interviewed by The HistoryMakers on September 11, 2001.

See how Lloyd Richards is related to other HistoryMakers
Click Here To Explore The Archive Today!