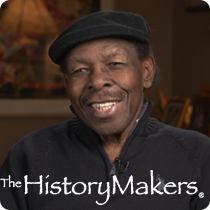 See how Lloyd Price is related to other HistoryMakers

Singer Lloyd Price was born on March 9, 1933 in Kenner, Louisiana to Beatrice Nicholas and Louis Price. Price received formal musical training in the trumpet and piano at an early age, and sang in his church's gospel choir. The eighth of eleven children, Price and his younger brother Leo played in a band together as teenagers.

After high school, Price worked at Louis Armstrong International Airport. He was discovered by New Orleans big band musician Dave Bartholomew when he overheard Price playing piano in his mother’s shop. Bartholomew introduced him to Specialty Records executive Art Rupe, who helped Price record his first major blues hit, “Lawdy Miss Clawdy,” with Fats Domino and Bartholomew’s band a few weeks later. The single was released in 1952, spending seven weeks at number one on the Billboard R&B chart, and becoming the R&B Record of the Year. However, Price’s success was short-lived as he was drafted into the U.S. Army to serve in the Korean War. Upon his return, Price settled in Washington, D.C., where he formed KRC Records with songwriter Harold Logan, and recorded the single, “Just Because,” which was released by ABC-Paramount Records for national release. From 1957 to 1959, Price recorded a series of national hits with ABC-Paramount Records, including “Personality,” “I'm Gonna Get Married” and “Stagger Lee”, which topped the pop and R&B charts and sold over one million copies. In the early 1960s, Price opened a club in New York called The Turntable, and founded two new labels, Double L and Turntable, where he continued to produce records. After his business partner’s murder in 1969, Price moved to Nigeria. In 1974, he helped to promote Muhammad Ali’s Rumble in the Jungle boxing match, and produced the Zaire 74 music festival in Kinshasa. Price toured Europe in 1993 with Jerry Lee Lewis, Little Richard, and Gary U.S. Bonds, and performed with soul legends Jerry Butler, Gene Chandler, and Ben E. King on the "Four Kings of Rhythm and Blues" tour in 2005. Price released twenty-seven albums during his almost fifty year career.

A highly revered musician, Price received the Pioneer Award at the sixth annual Rhythm and Blues Foundation ceremonies in Los Angeles in 1994, and was inducted into the Rock and Roll Hall of Fame in 1998. Price was also honored by his hometown of Kenner in 2001. He managed Icon Food Brands, which produced a line of primarily Southern-style foods, including “Lawdy Miss Clawdy” food products. Price was inducted into the Louisiana Music Hall of Fame in 2010.

See how Lloyd Price is related to other HistoryMakers