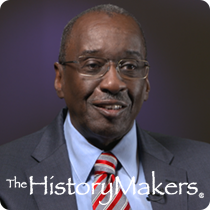 See how Lloyd G. Trotter is related to other HistoryMakers
Donate Now

Corporate executive Lloyd G. Trotter was born on April 9, 1945 in Cleveland, Ohio to Lillian Trotter and Reverend Lee Trotter, Sr. He graduated from John Adams High School in 1963, and entered an apprenticeship program with Cleveland Twist Drill. He studied at Cleveland State University while working at Cleveland Twist Drill, graduating in 1972 with his B.A. degree in business administration.

Trotter was promoted to a full-time product design and application engineer at Cleveland Twist Drill in 1967. He began working for General Electric (GE) as a field service engineer in 1970, where he was named vice president and general manager of manufacturing for the Electric, Distribution and Control division (ED&C) in 1990. That same year, he helped found the GE African American Forum, a mentor group for African American GE employees. While working in management at GE, he invented the Trotter Matrix, a tool for evaluating standards across various plants which was quickly adopted throughout the company. In 1991, Trotter became the president and CEO of the Electric, Distribution and Control division, and then to president and CEO of GE Industrial Solutions in 1998. In 2003, Trotter became senior vice president of GE Industrial, followed by executive vice president of operations at in 2005. In 2008, after almost forty years, Trotter left GE to become a managing partner at the private equity firm GenNx360 Capital Partners, which he founded with Ronald Blaylock, Arthur Harper and James Shepard.

Starting in 2008, Trotter served on the board of directors of PepsiCo as well as Textron, Inc., Meritor, Inc. and Daimler AG. Trotter also served on the boards of the National Association of Manufacturers (NAM), National Action Council for Minorities in Engineering, and National Electrical Manufacturers Association. He received the 2001 Lifetime Achievement Award from GE Chairman and CEO Jeff Immelt, and the GE Chairman’s Award for three consecutive years from 2003 to 2005. Trotter received an honorary doctorate degree from his alma mater, Cleveland State University, North Carolina A&T School of Business and Saint Augustine University. The National Society of Black Engineers (NSBE) honored Trotter with a schoarlship established in his name, and the Harlem YMCA presented him the Black Achievers in Industry Award.

Trotter and his wife, Teri, have three children.

Lloyd G. Trotter was interviewed by The HistoryMakers on October 25, 2016.

See how Lloyd G. Trotter is related to other HistoryMakers
Donate Now
Click Here To Explore The Archive Today!