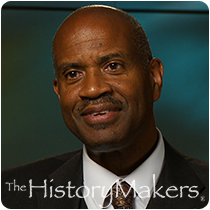 See how Lloyd Douglas is related to other HistoryMakers
Donate Now

Mathematician and education administrator Lloyd Evans Douglas was born on October 5, 1951 near the Polo Grounds in New York City. Douglas’ family moved to Brooklyn where he attended Lafayette Public School (now the Eubie Blake School) and Berriman Junior High School (J.H.S. 64) before graduating from Brooklyn Technical High School in 1968. He was awarded a New York State Regents Scholarship and enrolled in the City Colleges of New York where he graduated with his B.S. degree in mathematics in 1972. While there, Douglas earned three varsity letters as a lacrosse player. He then attended graduate school at Miami University and worked as a graduate assistant in the math department and as an assistant coach of the lacrosse team. Douglas received his M.S. degree in mathematics in 1974. Douglas went on to enroll in Boston University’s doctoral program where he studied algebraic coding theory under the late Dr. Edwin Weiss. He was awarded a senior teaching fellowship in the mathematics department and worked as a mathematics tutor in the resident tutor program.

From 1971 to 1976, Douglas worked at the law offices of LeBoeuf, Lamb, Leiby and MacRae in New York City as a paralegal assistant specializing in litigation. In 1976, he was hired as a mathematician in the U.S. Naval Underwater Systems Center (now called the Naval Undersea Warfare Center) in Newport, Rhode Island. Douglas joined the Trident Command and Control System Maintenance Activity in Newport in 1979 as a computer specialist where he was the on-site representative for the data processing subsystem on the first Trident submarines. From 1980 to 1983, Douglas served as an operations research analyst at the U.S. Army Communications-Electronics Command in Ft. Monmouth, New Jersey.

Douglas served on numerous committees in the Mathematical Association of America. In addition, he was elected as president of two, the Federal Executive Institute Alumni Association and the NSF Employees Association. He received NSF’s Meritorious Service Award in 2007.

Lloyd E. Douglas was interviewed by The HistoryMakers on June 19, 2013.

See how Lloyd Douglas is related to other HistoryMakers
Donate Now
Click Here To Explore The Archive Today!