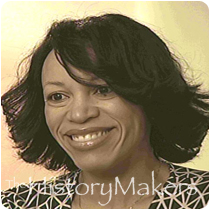 See how Lisa E. Davis is related to other HistoryMakers
Donate Now

Entertainment lawyer Lisa Ellen Davis was born on February 6, 1960 in Queens, New York. Her parents are Gwen Webb, a retired educator and Nat Davis, a jazz musician. She graduated from New Rochelle High School in 1977. In 1981, Davis received her B.A. degree from Harvard University and her J.D. degree from New York University School of Law in 1985.

Davis worked as a law clerk for the Honorable Constance Baker Motley in the United States Federal Court from 1985 to 1986. In 1986, she began working as an associate with the law firm of Kramer Levin. She joined Frankfurt Kurnit, Klein & Selz where she became a partner in 1995. Davis’ duties include negotiating financing, production and distribution agreements. Davis’ special expertise is in advising clients on exploiting potential markets. She has helped entertainment clients expand into complimentary business, including book and magazine publishing, concert promotion, music, celebrity endorsements and merchandising. Her clients include Spike Lee and Terry McMillan.

Davis has been quoted in Elle magazine, The New York Times and Black Enterprise magazine. She has been noted as one of America’s top black lawyers and one of the top 50 Power Brokers in entertainment by Black Enterprisemagazine.

Davis is a member of the New York City Bar, the Black Entertainment and Sports Lawyers Association and the National Bar Association.

Davis was interviewed by The HistoryMakers on January 8, 2007.

See how Lisa E. Davis is related to other HistoryMakers
Donate Now
Click Here To Explore The Archive Today!