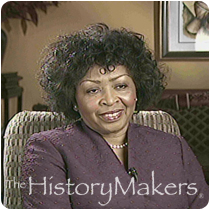 See how Linda Torrence is related to other HistoryMakers

Television producer and public relations director Linda Torrence was born on November 23, 1944, and grew up in College Station, Arkansas. She graduated from Wrightsville High School in Wrightsville, Arkansas in 1962. Her father, Samuel Hudson, was the city’s first black police officer. Torrence attended Arkansas Baptist College and majored in business administration. She was the first black teller at the First National Bank in Little Rock from 1962 to 1967 and later managed the College Station Community Credit Union in 1972. Torrence was politically active after high school and was the first African American female to represent Arkansas at the Democratic Convention in 1972 as an officer of the Young Democrats Club. She also hosted a television talk show on ABC-TV in Little Rock.

Torrence worked in adult education at the Urban League in Rochester, New York, and in fundraising at CBS, WHEC-TV as Director of Public Affairs. Torrence served as assistant to the director in the Donor Resources Department of the American Red Cross in Portland, Oregon, and co-founded two companies, the Walker (Business) Institute and Belcher-Torrence, a human resource company. Both companies offered business development and marketing strategies to businesses in the Portland community. Torrence was vice president of marketing and communications for the Private Industry Council (PIC) and director of human resources for Rogers Cable Television, a subsidiary of Canada’s largest cable company. At Rogers Cable, Torrence was the host of the talk show, Women in Focus, which aired for three years.

Torrence joined the staff of WAGA-TV in 1990. In her position as director of community relations and public service, Torrence is the station’s liaison to the Atlanta community. Torrence manages FOX5’s sponsorships of non-profit organizations and serves as the point of contact for community related activities and issues. She is producer of The Georgia Gang, a weekly talk show of panelists who discuss Georgia politics, and directs the production of FOX5 Editorials.

Torrence serves on the board of the Boys and Girls Club of Metro Atlanta, DeKalb County Chamber of Commerce, Rollins School of Public Health at Emory University, Grady Hospital Foundation and Georgia Commission on Women. She is the recipient of numerous awards and citations and has been honored by the Center for Disease Control (CDC) for her role in the development of the America’s Youth Passport. Torrence is a mother and grandmother. She resides in DeKalb County with her husband Joseph Phillips.

See how Linda Torrence is related to other HistoryMakers
Click Here To Explore The Archive Today!