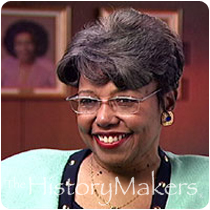 Favorite Color:
Aqua Green
Favorite Food:
Macaroni, Cheese, Prime Rib Steak
Favorite Quote:
You Can't Relive The Past. The Only Thing You Can Do Is Learn From It And Move Forward.

Favorite Color:
Aqua Green
Favorite Food:
Macaroni, Cheese, Prime Rib Steak
Favorite Quote:
You Can't Relive The Past. The Only Thing You Can Do Is Learn From It And Move Forward.

See how Linda M. White is related to other HistoryMakers
Donate Now

The 26th International President of Alpha Kappa Alpha (AKA) Sorority, Inc. (2002 – 2006) Linda White was born in Cleveland, Ohio to a dining car waiter and a homemaker. White worked for several years as a Social Security administrator while remaining active in the AKA Sorority. Under White’s leadership the Sorority established the Ivy Reading AKAdemy and initiated the Centennial Traveling exhibit.

Raised in Chicago, White graduated from Parker High School in 1959 before matriculating to Clark College in Atlanta, Georgia. While at Clark, White became active with the AKA Sorority and received her B.A. degree in 1963. She later went to the University of Chicago where she completed her M.A. degree in 1969. After earning a certificate in systems from Stanford University, White moved to Washington, D.C. in 1971 to work as a management analyst in the Department of Health and Human Services. She served in that capacity for two years before returning to Chicago, where she worked for the Social Security Administration. There, White rose to the rank of area director, managing the Chicago East District Office and overseeing twenty-nine Social Security offices in the region.

Upon her retirement in 2002, White began working full-time for the AKA Sorority. Then in July 2002, she became the Sorority’s International President. During her administration, White’s plan was to push the use of technology, particularly the Internet, to facilitate communication both within and beyond the organization. Additionally, she has earmarked education, the family, health, economics and the arts as program targets.

Active for more than forty years at the local and national levels of the AKA Sorority, White has contributed more than twenty years of service to the organization's educational foundation and serves as national president of the committee. She is a member of the Board of Directors of the United Negro College Fund (UNCF) and a life member of the NAACP. For more than fifty years, White has been a member of St. Mark United Methodist Church, where she is a former president of the Administrative Board and past chairperson of the Council on Ministries and Pastor/Parish Relations.

White was interviewed by The HistoryMakers on May 30, 2008 as part of the Alpha Kappa Alpha Sorority’s Centennial Boulé 2008 celebration. Segments of these interviews were used in a DVD entitled A.K.A. Sorority: A Legacy of Supreme Service.

See how Linda M. White is related to other HistoryMakers
Donate Now
Click Here To Explore The Archive Today!