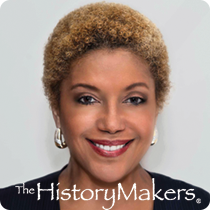 President and CEO of Johnson Publishing Linda Johnson Rice was born in Chicago, Illinois, on March 22, 1958. Her father, John H. Johnson is founder of Johnson Publishing Company, and her mother, Eunice Johnson, is producer and director of the Ebony Fashion Fair. Rice began her career with the family business, traveling with her mother to fashion shows in Paris starting at the age of six. While a student at the University of Southern California (USC), where she earned her degree in journalism in 1980, she spent her summers as an intern with Johnson Publishing.

In 1981, after graduating from USC, Rice made her first solo business trip to Europe to purchase clothing for the Ebony Fashion Fair. Her knack for predicting fashion trends led to her becoming the vice president and fashion coordinator for Ebony Magazine, and later vice president and assistant to the publisher. During this time, Rice enrolled in Northwestern University’s Kellogg Graduate School of Management, and earned her M.B.A. in 1987. Immediately following her graduation, Rice was promoted to president and chief operating officer of Johnson Publishing, a job she held until being promoted in 2002 to her current position as president and CEO. In this role, Rice has increased domestic and international sales, and launched Fashion Fair Cosmetics, the number one selling makeup and skin care product line for women of color in the world.

Rice has been recognized numerous times. She has also been the recipient of many awards, including the Women of Power Award from the National Urban League, the Tower of Power Award of the Trumpet Awards, Crain’s Chicago Business 40 Under 40 Award, the From Whence We Came Award and the Alumni of the Year Award from Kellogg Graduate School at Northwestern. She has also been named one of Chicago’s 100 Most Powerful Women and one of the Top 10 Women in Media by the Chicago Sun-Times.

At the time of the interview, she served on the board of directors of several companies and organizations, including Bausch & Lomb, the Magazine Publishers Association, the University of Southern California, the advisory board of the National Underground Railroad Freedom Center and the women’s board of the Art Institute of Chicago.

Linda Rice was interviewed by The HistoryMakers on November 11, 2004.

See how Linda Johnson Rice is related to other HistoryMakers
Donate Now
Click Here To Explore The Archive Today!