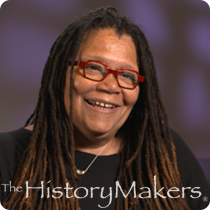 Filmmaker and nonprofit executive Linda Goode Bryant was born on July 21, 1949 in Columbus, Ohio to Floyd Goode and Josephine Goode. Bryant attended Spelman College in Atlanta, Georgia, where she received her B.A. degree in studio art with a minor in drama in 1972. She went on to earn her M.B.A degree in management from Columbia University in New York, New York in 1980.

After graduation from Spelman College, Bryant moved to New York City and was a fellow at the Metropolitan Museum of Art and worked in the education department of The Studio Museum in Harlem. In 1974, Bryan founded the Just Above Midtown gallery. The following year, Just Above Midtown gallery hosted the first New York solo exhibition for artist Davis Hammons. Bryant’s gallery also helped to launch the careers of artists such as Senga Nengudi, Maren Hassinger and Houston Conwill. In 1978, Bryant collaborated with Marcy S. Philips to write Contextures. In May 1982, Bryant and Janet Henry published the first issue of Black Currant, a publication that focused on the work of artists affiliated with JAM. From 1990 to 1991, Bryant worked as a senior policy analyst for economic development in New York under Mayor David Dinkins. In 2003, Bryant, with Laura Poitras, co-directed Flag Wars, a film about the gentrification of the Olde Towne East neighborhood of Columbus, Ohio during the late 1990s. The documentary won a Peabody Award in 2003 and its success led to Bryant receiving a Guggenheim Fellowship the following year. Apart from directing, Bryant was also a part of the film Colored Frames, a documentary that looked at the influences and experiences of black artists, over a fifty year period.

In 2003, Bryant founded the Active Citizen Project, which focused on the use of art and media to encourage teenagers to bring about social change. Through the Active Citizen Project, Open Caucus and Project EATS were established to engage teenagers in local political issues. Project EATS was founded in 2008, in the wake of the global food crisis, and focused on training urban communities to practice sustainable farming within their neighborhoods.

Bryant has one son, Kenneth Bryant, and three grandchildren.

Linda Goode Bryant was interviewed by The HistoryMakerson May 5, 2017.