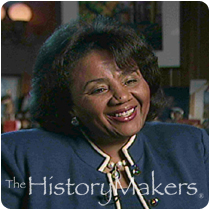 See how Linda Cropp is related to other HistoryMakers
Donate Now

Linda Washington Cropp was born on October 5, 1947, in Atlanta, Georgia. Her parents divorced when she was three years old, and she relocated to Philadelphia with her mother. As a single parent, her mother worked two jobs to support the family and send Cropp to Catholic school. Cropp earned her high school diploma in 1965 from Little Flower Catholic High School for Girls where she was active in student government and band. As a teenager, Cropp enjoyed photography and sewing, was a member of Girl Scouts of America.

In 1969, Cropp earned her B.A. degree in government from Howard University. During her senior year, she interned with the Washington, D.C., Board of Elections and Ethics. Shortly after graduation, she worked on her first political campaign, helping Marion Barry win a seat on the District of Columbia Board of Education.

Cropp began her teaching career in Washington, D.C., public schools in 1970. She earned her M.S. degree in guidance and counseling from Howard University in 1971. In 1980, she was elected to her first public office on the city’s Board of Education. In 1990, Cropp successfully ran against former Washington, D.C., Mayor Marion Barry for an at-large seat on the Council of the District of Columbia. In 1997, Cropp was elected as the first woman to chair the city council. Under her leadership, she has improved the Council’s use of technology and provided citizens greater access to the legislative process. In 2006, Adrian Fenty beat her out in the Democratic Primary for Mayor.

Cropp and her husband, Dwight, reside in Washington, D.C., and have two adult children.

See how Linda Cropp is related to other HistoryMakers
Donate Now
Click Here To Explore The Archive Today!