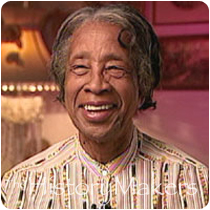 See how Lillie Mae Wesley is related to other HistoryMakers

Building a better community in her adopted hometown of Long Beach, California, occupied Lillie Mae Wesley nearly all her life. Born in Texarkana, Texas, on June 11, 1921, Wesley spent her childhood in Texas. In 1942, she married Ovid Wesley, who served in the Army during World War II. As her husband prepared to leave the service in 1944, Wesley moved to Long Beach, where her sister lived. Wesley took the opportunity afforded by her husband's return to pursue an education. She began at Long Beach City College and later attended Pacific College before completing her studies at Long Beach State University, where she received a B.A. in recreation and human services.

Both professionally and personally, Wesley worked to help people, especially the less fortunate, in Long Beach. Her first job in California was with the Salvation Army, where she worked for eleven years managing distribution of used clothing and furniture to thrift stores around the area. In the 1950s, Wesley took a position with the City of Long Beach, working in the Department of Recreation. She served in several capacities, including outreach to senior citizens, before retiring in 1980 as supervisor of the Park District.

Outside of her career, Wesley actively and selflessly served her community through her church, St. Mark Baptist Church. With the help of her church and fellow parishioners, Wesley established the first storehouse for the elderly in Long Beach. She also helped elderly, illiterate blacks complete application forms and other paperwork to receive entitlement benefits.

Though she never sought special recognition for her outreach, Wesley received several citations and commendations for her service. She received the Employee of the Year Award from the city of Long Beach in 1980, was recognized by Los Angeles County on Older Americans Recognition Day in 1996, was awarded a certificate from the Family Life Foundation for her service to Long Beach families, and was congratulated by Congress for her life's work and service. In 1992, Wesley became the first black grand marshal in the history of the Long Beach Inaugural Parade.

Wesley and her husband were married fifty-nine years. They have one daughter and one granddaughter. Wesley passed away on May 21, 2010.

See how Lillie Mae Wesley is related to other HistoryMakers
Click Here To Explore The Archive Today!