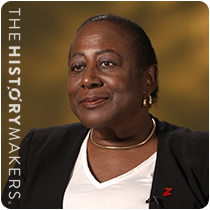 See how Lillian S. Williams is related to other HistoryMakers

Professor Lillian S. Williams was born on February 19, 1944 in Vicksburg, Mississippi to Ada L. Williams and James L. Williams, Sr. Williams graduated from Niagara Falls High School in Niagara Falls, New York in 1962, and earned her B.A. degree in history from the State University of New York at Buffalo in 1966. After working as a high school history teacher for several years, Williams went to earn her M.A. degree in history in 1973 and her Ph.D. degree in urban history in 1979, both from the State University of New York at Buffalo. While there, Williams founded the African American Historical Society of the Niagara Frontier in 1974, and served as associate editor of the Afro-Americans in New York Life and History Journal starting in 1977.

Williams worked as an assistant professor in the department of history at Howard University from 1979 until 1986, when she became a visiting professor in the department of American Studies at the University of Buffalo. She also taught as an assistant professor of women’s studies and Africana Studies at the State University of New York at Albany, where she also served as the director for the Institute for Research on Women. In 1990, Williams wrote an article called “And Still I Rise: Black Women and Reform, Buffalo, New York, 1900-1940,” which was published in the Afro-Americans in New York Life and History Journal. Then, in 1996, she published a monograph entitled A Bridge to the Future: the History of Diversity in Girl Scouting. Williams was promoted to associate professor at the University of Albany in 1996. She released her first book, Strangers in the Land of Paradise: The Creation of an African American Community, Buffalo, New York, 1900-1940 in 1999. In 2002, Williams became an associate professor at the State University of New York at Buffalo.

In addition to becoming a Rockefeller Foundation Minority Scholars Fellow, Williams has received numerous awards, including the Nuala McCann Dresher Award, and the University at Albany “Bread and Roses” Award for Distinguished University Service. In 2000, Williams was honored with a lifetime achievement award from the Niagara County Black Achievers. She was selected as a fellow for the National African American Women’s Leadership Group in 2001. Williams was also a recipient of the SUNY Chancellor’s Award for Excellence in Teaching. She served on the board of directors for Albany’s NAACP, and was a member of the New York State Historic Records Advisory Board. Williams also served on the education committee of the Buffalo Urban League and the editorial board of the Journal of African American History.

Lillian S. Williams was interviewed by The HistoryMakers on April 22, 2018.

See how Lillian S. Williams is related to other HistoryMakers