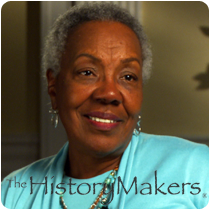 See how Lillian Lambert is related to other HistoryMakers
Donate Now

Entrepreneur Lillian Lincoln Lambert was born on May 12, 1940 in Ballsville, Virginia to Willie D. Hobson, a farmer and Arnetha B. Hobson, a school teacher and homemaker. Lambert graduated from Pocahontas High School in Powhatan, Virginia in 1958. Her mother, a college graduate, urged Lambert to pursue an advanced degree, but she wanted to move to New York City instead. She worked as a maid on Fifth Avenue, a typist at Macy’s Department Store and a travelling saleswoman. Lambert then moved to Washington, D.C. in 1961, where she worked for the federal government as a typist in the Veteran Affairs Division and later with the Peace Corps while going to school at the District of Columbia Teacher’s College (now the University of the District of Columbia). In 1962, Lambert enrolled as a full-time student at Howard University at the age of twenty-two. Under the mentorship of Professor H. Naylor Fitzhugh, she majored in Business Administration and applied to Harvard Business School. Lambert graduated from Howard University in 1966 with her B.A. degree in business administration and started Harvard Business School in 1967. At Harvard Business School, she worked with four other black students to increase the number of African American enrollments and in 1968, they founded the African American Student Union. Lambert graduated in 1969 and was the first African American woman to receive her M.B.A. degree from Harvard Business School.

Lambert was then hired at the Sterling Institute in Washington, D.C. and later as a manager at the National Bankers Association. In 1972, Lambert joined Ferris & Company as a stockbroker. In 1973, she began teaching at Bowie State College and became the executive vice president of Unified Services, a janitorial services company. Then in 1976, Lambert left Unified Services to start her own janitorial company, Centennial One, Inc. Starting in her garage, she grew Centennial into a business with more than 1,200 employees and $20 million in sales. In 2001, Lambert sold her company and in 2002, she became president of LilCo Enterprises. She now serves as a coach, consultant and public speaker.

Lambert is the recipient of numerous awards including the Small Business Person of the Year for the State of Maryland in 1981 and the Harvard Business School Alumni Achievement Award in 2003, the school’s highest honor for its alumni. She has served on the board of visitors for Virginia Commonwealth University, the board of regents for the University System of Maryland, the board of directors for the African American Alumni Association of Harvard Business School and committee vice chair for the Manasota Chapter of the Association for the Study of African American Life and History. Lambert is married to John Anthony Lambert, Sr. and has two adult daughters, Darnetha and Tasha.

Lillian Lincoln Lambert was interviewed by The HistoryMakers on February 9, 2012.

See how Lillian Lambert is related to other HistoryMakers
Donate Now
Click Here To Explore The Archive Today!