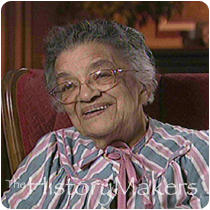 See how Lillian Dickerson is related to other HistoryMakers

Lillie Benning Dickerson was born in the 1100 block of Fitzwater Street in Philadelphia, Pennsylvania, on June 12, 1902. Dickerson’s grandmother was a slave from Sierra Leone who was raised by the family of Philadelphia financier Nicholas Biddle; her grandfather, an escaped slave, worked for the Thayer family in Mainline, a prosperous area on the outskirts of Philadelphia. Dickerson’s mother, Julia Capps Benning, and father, George Edward Benning, travelled to Philadelphia by stagecoach from Charleston, South Carolina, and bought the house on Fitzwater Street in 1910. Dickerson attended Pollack Elementary School and graduated from South Philadelphia High School in 1920.

As a teenager, Dickerson was a piano accompanist for her friend and neighbor, Marian Anderson. Dickerson was also friends with Paul Robeson’s sister, Marion, and songwriter Oscar Hammerstein II. Dickerson supported NAACP Attorney Raymond Pace Alexander’s successful campaign and lawsuit to integrate restaurants and shops on Philadelphia’s Chestnut Street between 1933 and 1935. During World War II, Dickerson and other black women were hired by the United States Post Office but, because of unequal pay and unfair treatment, she wrote an appeal to Eleanor Roosevelt on behalf of her colleagues.

Dickerson’s husband, Earl, the chauffer of baseball’s Connie Mack, lived with her until his death in the 1960s. In 2006, at the age of 104, Dickerson honored by her community for being the oldest gardener participating in the award-winning 2120-2124 Fitzwater Street Garden Project.

See how Lillian Dickerson is related to other HistoryMakers
Click Here To Explore The Archive Today!