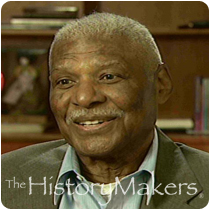 See how Lez Edmond is related to other HistoryMakers

Distinguished professor Lez Edmond was born in Jacksonville, Florida. He was on the faculty of one of America’s leading Catholic institutions of higher learning, St. John’s University in New York City. As a child, Edmond attended a Seventh Day Adventist school, where he received his high school diploma. Edmond continued his education and received his B.A. degree and his M.A. degree from Adelphi University. He then received his PhD degree from the Union Institute in Cincinnati, Ohio.

In 1962, Edmond co-authored with Earl Sweeting African History: An Illustrated Handbook, presenting the accomplishments of the continent of Africa and its people. In 1964, Edmond wrote the Harlem Diary, chronicling his thoughts and observances about Harlem’s 1964 race riot. Harlem Diary appeared in the Catholic magazine, Ramparts, and was reprinted in Reporting Civil Rights: American Journalism. By the late 1960s, Edmond had become a known civil rights activist in Harlem. He worked closely with several civil rights leaders including Malcolm X, who invited him to attend meetings at the Nation of Islam.

Edmond began his professional career in research and development at Radio Engineering Lab in Long Island, New York. Joining Seton Hall University, Edmond began his teaching career. He continued his studies with psychologist Carl Rogers before joining St. John’s University as an associate professor of Psychology and the Social Sciences at the school’s College of Professional Studies. Edmond was the recipient of the Spirit of St. John’s Award.

See how Lez Edmond is related to other HistoryMakers
Click Here To Explore The Archive Today!