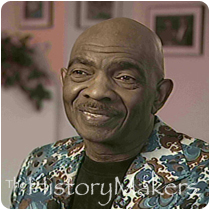 See how Lewis Myers is related to other HistoryMakers

Actor and theatrical director Lou Myers was born Lewis Eddy Myers on September 26, 1935 in Laing, West Virginia. Myers was raised in nearby Cabin Creek by his mother, Dorothy Louise Brown Myers and his father, Otis Louis Myers, a mine worker fluent in German. Myers attended Wake Forest School and Washington High School. When his father died and his mother became ill, Myers moved to Cleveland, Ohio for work. There, he performed in Karamu Theatre’s junior department production of Take A Giant Step. Myers joined the United States Air Force in 1951 where he received his GED. Discharged in 1953, Myers entered West Virginia State University earning his B.A. degree in sociology.

Moving to New York City, Myers worked for the New York City Board of Education and the New York City Department of Recreation. He narrated the production, Negro Music In Vogue and performed as “the griot” with Dinizulu’s African Dance Company. In 1968, Myers auditioned for the Negro Ensemble Company’s production of Genet’s The Blacks: A Clown Show and was understudy to Louis Gossett, Jr. In 1976, Myers was cast in the Broadway production of Leslie Lee’s The First Breeze of Summer, which was later televised. He was featured in the original cast of most of August Wilson’s plays, including Ma Rainey’s Black Bottom, Fences and The Piano Lesson. Myers gained notoriety for his role as Mr. Gaines on The Cosby Show spinoff, A Different World from 1988 to 1993. Among his myriad of movie credits are: Cobb (1994), Bulworth (1998), How Stella Got Her Groove Back (1998), Volcano (1997), The Fighting Temptations (2003), and Lackawanna Blues (2005).

Myers won an NAACP Image Award for his role as “Stool Pigeon” in the August Wilson play, King Hedley II. He has also won the off-Broadway Audelco Award for his role in the play, Fat Tuesday. In 2005, the Appalachian Education Initiative listed Myers as one of fifty “Outstanding Creative Artists” from the State of West Virginia and featured him in their coffee table book Art & Soul. Myers is the founder of the Tshaka Ensemble.
Myers has a grown son, Melvin Myers, a grandson and lives in Harlem where the neighborhood youth call him “Mr. Gaines.”

Myers was interviewed by The HistoryMakers on April 19, 2007.

See how Lewis Myers is related to other HistoryMakers
Click Here To Explore The Archive Today!