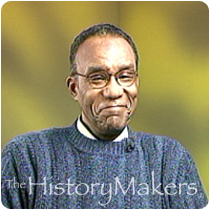 See how Leslie Outerbridge is related to other HistoryMakers

Fireman Leslie Outerbridge risked his life to save others and risked his job for racial justice. Born December 29, 1936 in Chicago, Outerbridge grew up in the Cabrini Green projects. His father, a former cricket champion from Bermuda, taught him about fair play. Outerbridge was a good student at Jenner School and entered Wells High School early at age twelve. Dropping out at age fifteen, he joined the Air Force in 1953. There, he played on the installations’ basketball, football and baseball teams. After his discharge, Outerbridge drove a taxi, until his father’s friend, Robert Thompson, a black firefighter, “sponsored” him for the Chicago Fire Department (CFD). Outerbridge passed the written exam, but “failed” his first physical. Later, Outerbridge found that his father’s donation of $300 ensured that he “passed” the second time around in 1961. Outerbridge later returned to school, earning a B.S. from Chicago State University in 1981.

In 1968, Outerbridge, along with Jim Winbush and Wesley Thompson and backed by the NAACP, Operation PUSH, and the Chicago Urban League, with inspiration from Father George Clements, Anderson Thompson, and legal assistance from Attorney Kermit Coleman, formed the Afro American Firefighters League (AAFL). The AAFL completed a study in 1973 that detailed the Chicago Fire Department’s record of racial discrimination in hiring and promotional practices. The United States Justice Department filed a lawsuit against the City of Chicago that same year. Mayor Daley signed the court ordered “consent decree” in 1977, which resulted in increasing the number of black firefighters from 125 to 400 by 1979. Now, the number is over 1,000. Forced to fight a relentless paper war with unhappy CFD brass, Outerbridge discovered that paperwork was their weakness. For thirty-seven years he performed his duties and retired in 1995. Outerbridge was also a founder of the International Association of Black Professional Firefighters in 1969.

A talented photographer and part time model, Outerbridge has researched the history of African Americans, the CFD and the great Chicago fires – a history that goes back to 1873 when Willie Watkins was the first black firefighter. Outerbridge lives in Chicago’s West Chesterfield neighborhood with his wife, Annie.

See how Leslie Outerbridge is related to other HistoryMakers
Click Here To Explore The Archive Today!