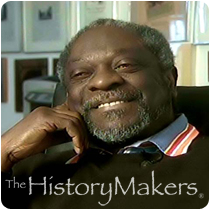 See how Les Payne is related to other HistoryMakers

Journalist and author Les Payne was born on July 12, 1941 in Tuscaloosa, Alabama. As a child, Payne was always interested in writing. He graduated from the University of Connecticut in 1964 with B.A. degree in English. Serving six years in the United States Army, Payne worked as an Army journalist and wrote speeches for General William C. Westmoreland. While on assignment in Vietnam, he ran the Army’s newspaper, and when he was discharged, he had attained the rank of captain.

Payne joined Newsday in the late 1960s, serving as the associate managing editor for the paper’s national, science, and international news. In 1968, as an investigative reporter, Payne covered the assassination of Dr. Martin Luther, Jr., and in the 1970s, he covered the Black Panther Party. He won a Pulitzer Prize for The Heroin Trail in 1974, which was a Newsday series in 33 parts that traced the international flow of heroin from the poppy fields of Turkey to the veins of drug addicts in New York City. Later, it became a published book. He also covered the Symbionese Liberation Army and authored The Life and Death of the Symbionese Liberation Army. As a Newsday correspondent, Payne reported extensively from Africa, Europe, the Caribbean and the United Nations. During the 1976 Soweto uprising, he traveled throughout South Africa and wrote a series that was also nominated for a Pulitzer Prize in foreign reporting. Payne was also responsible for Newsday’s Queens edition, whose news staffs have won every major award in journalism, including three Pulitzer Prizes. He was also a columnist for the Tribune Media Services.

As one of the founders and former presidents of the National Association of Black Journalists, Payne worked to improve media fairness and employment practices. He was also the Inaugural Professor for the David Laventhol Chair at Columbia University’s Graduate School of Journalism. Payne received several awards including the United Nations’ World Hunger Media Award, and three Unity Awards for investigative reporting. In 1990, he won cable television’s highest honor, the Ace Award, for an interview with Mayor David Dinkins on Les Payne’s New York Journal. In addition, he was a recipient of two honorary doctorate degrees from Medgar Evers College and Long Island University.

See how Les Payne is related to other HistoryMakers
Click Here To Explore The Archive Today!