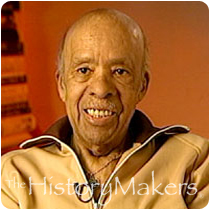 See how LeRoy Winbush is related to other HistoryMakers
Donate Now

Renaissance man LeRoy Winbush was born on December 7, 1915, in Memphis, Tennessee. His many accomplishments include founding his own graphic design business and creating a name for himself as a scuba diver as well as a bowler and skier.

At age five, Winbush moved with his father to Detroit, Michigan, after his parents separated. He moved to Chicago at age fourteen and attended Englewood High School. He performed with a singing trio called the Melody Mixers, which gained attention through engagements at clubs and hotels as well as on CBS and NBC radio stations. After graduating from high school in 1936, Winbush worked at a sign shop as an apprentice. The Regal Theatre hired him in 1938 to design and paint the theater front. Then, he designed signs and displays as the only African American employee at Goldblatt's Department Store and eventually became their art director. In the 1940s, Winbush revolutionized the window displays of banks and earned a reputation as one of the country's top airbrush artists. He also worked as art director at Johnson Publishing Company for a decade, where he helped to create the first issue of Ebony. He then founded Winbush Designs in 1946.

After a solid career as a pioneering graphic designer, Winbush tackled a new challenge at age forty-eight: he learned how to swim at Chicago's Lawson YMCA. He enjoyed it so much that he studied scuba diving, qualifying for Lawson's 20 Fathom Club in 1966. He served as the club's president from 1968 to 1983. Winbush has led underwater expeditions all over the world, including the Red Sea, Dutch West Indies and Jamaica. He combines his love for diving and designing as an underwater photographer and has created oceanic exhibits in Florida's Epcot Center as well as Hong Kong's Ocean Park Museum. Winbush began ice diving in 1973.

Winbush has held many prestigious posts. He was the director of design for the Illinois Sesquicentennial Celebration in 1967 and served as vice president of Our World Underwater, an annual seminar in Chicago, for seventeen years. He has been a design consultant for the DuSable Museum since 1992. Without having attended college or any art schools, Winbush became an assistant professor in visual communications at the School of the Art Institute of Chicago. He is currently writing his autobiography.

See how LeRoy Winbush is related to other HistoryMakers
Donate Now
Click Here To Explore The Archive Today!