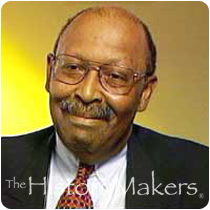 See how Leroy C. Richie is related to other HistoryMakers

Born on September 27, 1941, in Buffalo, New York, to Mattie and Leroy C. Richie, the younger Leroy C. Richie graduated as valedictorian of his class at the City College of New York in 1970. After earning his law degree from New York University in 1973, Richie worked in private practice for the New York law firm of White & Case until 1978. Richie then entered government service when he was appointed to serve as director of the Federal Trade Commission's New York office.

In 1983, Richie entered corporate America as assistant general counsel to the Chrysler Corporation under the reign of Lee Iacocca. Given some key assignments, Richie quickly rose to vice president and general counsel; he was the only African American in the top ranks of the giant Detroit automaker at that time. In 1992, Richie made history again by becoming the first African American to serve as general counsel to the Executive Committee of the United States Golf Association. In 1997, Richie was elected to the organization's board of directors.

Richie was active in promoting diversity in the legal profession; he frequently spoke on that issue at conferences and on panels. Richie was also secretary of Detroit's Museum of African American History and served as an officer for the Detroit Black Chamber of Commerce. Additionally, Richie served as a board member for Marygrove College; St. Joseph's Hospital in Pontiac, Michigan; and the Detroit Bar Foundation. Richie and his wife, Julia C. Thomas, were married in 1972; the couple raised two children, Brooke and Darcy.

See how Leroy C. Richie is related to other HistoryMakers
Click Here To Explore The Archive Today!