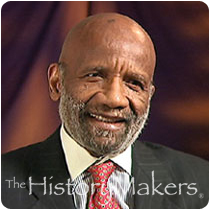 See how Lerone Bennett is related to other HistoryMakers
Donate Now

Historian Lerone Bennett served as the executive editor of Ebony for almost forty years. His written work deftly explored the history of race relations in the United States as well as the current environment in which African Americans strive for equality. Bennett was born on October 17, 1928, in Clarksdale, Mississippi, to Lerone and Alma Reed Bennett. When Bennett was young, his family moved to Jackson, Mississippi, and it was here, while attending Jackson's public schools, that Bennett's interest in journalism was initiated.

Bennett attended Morehouse College, earning a B.A. in 1949. He always considered Morehouse as the center of his academic development. After graduating, Bennett formally entered the world of journalism as a reporter for the now defunct Atlanta Daily World. He became the city editor for the magazine and worked there until 1953, when he began his work as an associate editor at Jet magazine in Chicago, Illinois. In 1954, Bennett became an associate editor at Ebony and he was promoted to senior editor of the magazine in 1958. Since then, his comprehensive articles became one of the magazine's literary hallmarks.

A series of articles originally published in Ebony resulted in Bennett's first book, a seminal piece of work, Before the Mayflower: A History of Black America, 1619-1962. The book, with its comprehensive examination of the history of African Americans in the United States, gave Bennett the reputation of a first-class popular historian. In his eight subsequent books, Bennett continued to document the historical forces shaping the Black experience in the United States. His other works included: What Manner of Man?, Pioneers In Protest and The Shaping of Black America.

Bennett received numerous awards such as the Literature Award of the Academy of Arts and Letters, Book of the Year Award from Capital Press Club and the Patron Saints Award from the Society of Midland Authors. He served as advisor and consultant to several national organizations and commissions, including the National Advisory Commission on Civil Disorders. Bennett's articles, short stories and poems have been translated into five languages.

See how Lerone Bennett is related to other HistoryMakers
Donate Now
Click Here To Explore The Archive Today!