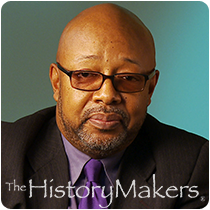 See how Leonard Pitts is related to other HistoryMakers

Journalist and author Leonard Garvey Pitts, Jr. was born on October 11, 1957 in Orange, California to Leonard Garvey and Agnes Rowan Pitts. He grew up in the impoverished South Central section of Los Angeles, California. A successful student, Pitts skipped several grades and entered the University of Southern California at age fifteen, where he graduated with his B.A. degree in English in 1977.

Throughout the 1970s and 1980s, Pitts worked as a freelance journalist, writing for publications ranging from Musician to Reader's Digest. From 1976 until 1980, Pitts worked for Soul magazine as writer and editor. In 1980, he was hired as a writer for KFWB radio in Los Angeles, and, from 1983 to 1986, he worked for a program called Radioscope. Pitts wrote scripts for several radio documentaries in the late 1980s, including King: From Atlanta to the Mountaintop, Who We Are, and Young Black Men: A Lost Generation. He was hired by Westwood One, Inc. in 1989, and then by the Miami Herald in 1991, where he served as a music critic. Then, in 1994, Pitts was promoted to columnist at the Miami Herald, where he authored a column on race, politics and culture. His column was picked up for syndication by the Knight Ridder News Service, and appeared in about 250 newspapers.

Pitts is also the author of four books. His first book, Becoming Dad: Black Men and the Journey to Fatherhood was published in 1999; Before I Forget, Pitts’s first novel, was released in March 2009; Forward from This Moment: Selected Columns, 1994-2008 was published in August 2009; and Freeman, his second novel, was released in 2012. Pitts has also been invited to teach at a number of institutions, including Hampton University, Ohio University, the University of Maryland, and Virginia Commonwealth University. In 2011, he served as a visiting professor at Princeton University, and in 2013, he taught at George Washington University.

Pitts has received numerous awards. In 1997, he took first place for commentary in the American Association of Sunday and Feature Editors' Ninth Annual Writing Awards competition. In 2001, Pitts received the American Society of Newspaper Editors ASNE Award for Commentary Writing, and was named Feature of the Year - Columnist by Editor and Publisher magazine. In 2002, the National Society of Newspaper Columnists awarded Pitts its inaugural Columnist of the Year award. In 2002 and in 2009, GLAAD Media awarded him the Outstanding Newspaper Columnist award, and, in 2004, he was awarded a Pulitzer Prize for commentary. Pitts also received the National Association of Black Journalists’ Award of Excellence three times, and was chosen as NABJ’s 2008 Journalist of the Year. He is a five-time recipient of the Atlantic City Press Club’s National Headliners Award and a seven-time recipient of the Society of Professional Journalists’ Green Eyeshade Award. Pitts has received honorary doctorate degrees in humane letters from Old Dominion University and Utica College.

Leonard Pitts was interviewed by The HistoryMakers on October 23, 2013.

See how Leonard Pitts is related to other HistoryMakers
Click Here To Explore The Archive Today!