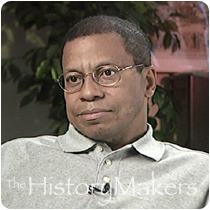 See how Leonard Blackshear is related to other HistoryMakers
Donate Now

Leonard Blackshear was born on June 29, 1943, in Savannah, Georgia. Blackshear's mother was a housewife and worked various part-time jobs in the healthcare industry; his father worked in electronics and later went on to become a teacher and counselor. At an early age the family moved from Savannah to New York where Blackshear attended elementary and junior high schools; he graduated from John Adams High School in 1959, where he was a member of the chess team and enjoyed poetry readings. Blackshear attended Hunter College in New York.

In the early 1960s, Blackshear joined Harlem Youth Opportunities Unlimited, a nonprofit organization that provided youth programs for Harlem youngsters. He then went on to work in several odd jobs until he enlisted in the United States Air Force in 1964. While in the Air Force, Blackshear was trained as a guided missile technician in Denver, Colorado. While serving in the military in 1967, he helped organize and host the largest chess tournament in Europe. He left the military in 1968 and enrolled at the University of Maryland where he earned his B.S. degree in physics in 1970.

From 1970 to 1973, Blackshear worked as a systems engineer and marketing representative for International Business Machines (IBM). From 1973 through 1978, he worked for Anne Arundel County Economic Opportunity Commission while earning his MBA in finance from American University in 1975. In 1978, Blackshear was bitten by the entrepreneurial bug and started his own information technology firm, TeleSonic, where he continued serve as president throughout his career.

In 1985, Blackshear founded and became president of Kunta Kinte Celebrations, best known for summer Kunta Kinte festivals that attract thousands of tourists to Annapolis, Maryland, believed to be the port of arrival for the slave Kunta Kinte. He served in this post until 1992, when he founded and became president of the Kunta Kinte-Alex Haley Foundation, which celebrated the words and messages of author, Alex Haley. In 1992, Blackshear successfully secured support from the Annapolis City Council to build a memorial commemorating the actual arrival of an enslaved African to America; the memorial was completed in 2002, seen by an estimated one million people annually.

Blackshear also worked on an international project called the Lifeline Walk, a symbolic walk of forgiveness, where whites wear yokes and chains while blacks walk along side them. Annapolis was the first stop on the American tour of the walk, which began in September 2004.

See how Leonard Blackshear is related to other HistoryMakers
Donate Now
Click Here To Explore The Archive Today!