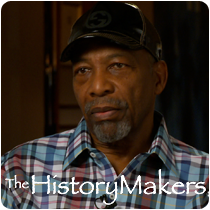 R&B record company owner Leon Huff was born in Camden, New Jersey on April 8, 1942. Huff was first exposed to music through his mother, who played the piano and the organ for the 19th Street Baptist Church choir. Huff began playing the piano at the age of five; he received basic lessons from his mother as well as formal teaching through the school system and private lessons. As a teenager, Huff participated in several “doo-wop” music groups throughout Camden. One of his groups, “The Dynaflows,” auditioned for the popular television show, Ted Mack’s Original Amateur Hour.

In 1950, Huff and Kenneth Gamble came together in a vocal group called “The Romeos.” Huff had already worked in sessions with music producer Phil Spector in New York, including the Danny and the Juniors hit “Let's Go to the Hop.” Returning to Philadelphia, Huff did sessions for local label Cameo who were already successful with Chubby Checker and Bobby Rydell. Fellow Romeo, Kenny Gamble, co-wrote a song for Candy and the Kisses on which Huff performed. In 1966, Gamble and Huff formed Excel Records; and, in 1967, they produced the Soul Survivors’ hit single, “Expressway to Your Heart.” They continued working as independent producers with acts like Archie Bell and the Drells and Jerry Butler. They also had their own Neptune Label (through Chess Records) and Gamble records.

Gamble and Huff have been awarded the highest accolades in the music industry. In 1993, Huff, along with his songwriting and producing partners Kenny Gamble and Thom Bell, was inducted into the Philadelphia Music Foundation’s Walk of Fame; brass plaques with their names were placed on the sidewalk of Broad Street’s Avenue of the Arts in Philadelphia not far from Philadelphia International studios. Gamble and Huff were inducted into the National Academy of Songwriters’ Hall of Fame and the Rock and Roll Hall of Fame. In 1999, they received the Trustees Award from the National Academy of Recording Arts and Sciences.

Musician Leon A. Huff was interviewed by The HistoryMakers on March 26, 2013.