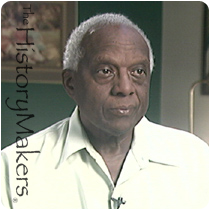 Leon Bridges was born on August 18, 1932 in the East Los Angeles, California barrio of Boyle Heights. His mother was a postal worker and his father worked various jobs. There, he attended Foshay Elementary School in Los Angeles. As a youngster he enjoyed drawing floor plans and building designs and knew early on that he wanted to pursue a career in architecture. While a student at Adams Junior High School he met his mentor, famed African American architect, Paul Williams. Bridges earned his high school diploma from Dorsey High School in 1950 where he was a member of the track team.

After graduation he attended East Los Angeles Junior College, Los Angeles City College and the University of California, Los Angeles. While a student at UCLA, Bridges was drafted into the military in 1952, and was stationed in Japan. While a soldier, he continued to study architecture. He also began to pursue an acting career and appeared as an extra in several movies and toured with the Griffith Park Greek Theatre Light Opera Company from 1950 through 1952. He earned his bachelor’s of architecture from the University of Washington in Seattle in 1960.

While still a student at the University of Washington, Bridges received his first job in 1956 as a draftsman. During the summer of 1957, he worked as an intern for California architect Alan Morris and supervised the construction of a house. From 1959 through 1961, he worked for a small architecture firm designing houses. His first design was for a home that was just 1350 square feet. From 1961 through 1963, Bridges worked for the architecture firm Gotteland and Kocarski as a draftsman and designed Catholic churches and buildings in Seattle. In 1962, Bridges became a registered architect.

Bridges formed his own architecture firm, Leon Bridges AIA in 1963, and his first project was designing a building for the Seattle YMCA. In 1966, he formed a partnership with colleague Edward Burke and they worked together until 1972 when Bridges relocated his firm to Baltimore, Maryland. He was the first registered African American architect in Maryland. In 1971, he served as National Director of the Amrerican Institute of Architects (AIA). Bridges co-founded the AIA/Ford Minority Scholarship fund, which has provided millions of dollars in college scholarships for needy students, in 1976, and in 1984 he was nominated as a Fellow of the College of Fellows, AIA. That same year he also earned his MBA from Loyola College of Maryland.

Bridges is he recipient of more than twenty national, regional and local awards for design excellence including the restoration of Baltimore’s Penn Station and Baltimore City College High School. Bridges is also a member of the counsel of the National Organization of Minority Architects (NOMA), for which he has served in every national office, including president.

Currently, Bridges is a partner in The Obsidian Group, an architectural, design and planning firm with offices in Baltimore, New York and North Carolina. He is also very active as a mentor in the NAACP’s ACT-SO national mentoring program.

Bridges was interviewed by The HistoryMakers on June 29, 2004.