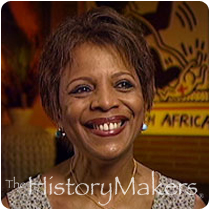 Washington, D.C. attorney Leola "Roscoe" Dellums was born in Berkeley, California, on December 12, 1941, representing the third generation of her family to live there. Dellums' mother, Esther L. Higgs, was a musician and early crusader in the civil rights movement, and her father, Leo, was the first African American realtor in California. Dellums traces her ancestry back to Revolutionary War veterans. While attending high school, Dellums was a regular on TV's Dance Party and was inducted into the National Thespian Society. In 1959, she went to San Francisco State University, where she became the first black pom-pom girl and the first African American on the homecoming court. Dellums left school in 1962 to marry, and returned several years later to earn a B.A. in sociology. She later earned a J.D. from Georgetown University.

Dellums' early career found her teaching English as a second language in 1966, as well as working in television in both California and Washington, D.C. By 1974, she had combined the two into consulting on educational television programs in the D.C. area. She also worked as a reporter and broadcaster for various news programs throughout the Washington metro area from 1972 into the 1980s. In 1976, Dellums joined the American Civil Liberties Union as a publicist and remained there for two years. Dellums went to the House of Representatives in 1983 to work as a special assistant to Representative Mickey Leland, and in 1984 became a judicial law clerk in the Superior Court of the District of Columbia. From 1985 to 1992, Dellums worked in the California Assembly Office of Research as a consultant to state representatives in Washington and leadership in California. Beginning her legal practice in 1993, Dellums went to work at Washington & Christian, specializing in government relations and lobbying. In 1995, she opened her own law firm.

In addition to her extensive experience in a wide variety of fields, Dellums has published poetry and written songs and also wrote the script for a Disney Channel movie about her family. She is the recipient of a Solid Image Award and the National Sojourner Truth Meritorious Service Award and is listed in Who's Who Among Black Americans. She is a board member of the Brady Campaign Against Gun Violence, the Black Filmmakers Hall of Fame National Advisory Board, and a former member of the San Francisco State University Alumni Board.

Dellums was married to California Congressman Ronald V. Dellums for thirty-seven years. She has three children and three grandchildren.

See how Leola "Roscoe" Dellums is related to other HistoryMakers
Donate Now
Click Here To Explore The Archive Today!