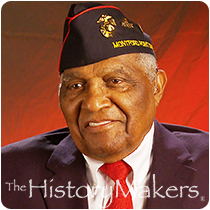 See how Lenon Lathan is related to other HistoryMakers

Montford Point Marine Lenon Lathan was born on July 19, 1926 in Sturgis, Mississippi. He was the tenth oldest twin of three sets of twins and fifteen other siblings born of Oscar Lathan and Mary Frazier. Lathan grew up in Sturgis and attended Paul Lawrence Dunbar High School in Mobile, Alabama where he played baseball and basketball as a young man. Lathan later enrolled in continuing education classes and studied Spanish at the City Colleges of Chicago. He is also a graduate of Washburn Trade School in Chicago where he later worked as a union pipefitter.

Lathan enlisted in the U.S. Marine Corps in Starkville, Mississippi in September of 1944 and as a private at DHIRS, Jackson, Mississippi. He trained at Camp Lejeune, North Carolina with the 43rd Marine Depot Company for one year and then was promoted to private first class (PFC) with the 25th Marching Depot Company. Lathan deployed to the Pacific Theater during World War II on board the USS DOROTHEA. He served under Second Lieutenant Kenneth I. Tuttle at Guam, Marianas Islands. In addition, he served aboard the USS GENERAL W.C. MITCHELL at Guam, Marianas Island. Lathan received an Honorable Discharge in 1948. In 1987, he retired from Local Union #597 Chicago Pipe Fitters and became an entrepreneur opening a bar and lounge on 12th Street & Wabash Avenue in Chicago, Illinois.

Lathan is a member of Grant Memorial A.M.E. Church, and has traveled to forty-eight of the fifty states and has visited five continents. As a veteran of the U.S. Marine Corps, the “Honor Flight Chicago” selected him to join other veterans on a trip to Washington, D.C. to see the WWII Memorial built in their honor.

Lathan was married to Mildred Barron for nearly fifty years before her passing in 1996. They had nine children, two of which preceded their mother in death. Together with his wife, Lathan raised his children in Chicago’s Lincoln Park area; and all seven children either graduated from private high schools or universities. He also has twelve grandchildren and five great-grandchildren.

Montford Point Marine Lenon Lathan was interviewed by The HistoryMakers on August 20, 2013.

See how Lenon Lathan is related to other HistoryMakers
Click Here To Explore The Archive Today!