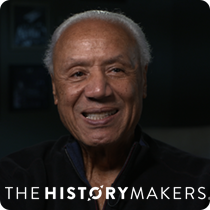 "Be Consistent In What You Do And What You Say."

Basketball coach and player Lenny Wilkens was born on October 28, 1937 in Brooklyn, New York. He graduated from Boys High School in Brooklyn and received his B.A. degree from Providence College in 1960, where he was a two-time All-American on the men’s basketball team.

Wilkens was chosen by the St. Louis Hawks in the 1960 National Basketball Association (NBA) draft. He spent eight years with the Hawks organization and between 1960 and 1970, he was voted to nine all-star teams and finished second to Wilt Chamberlain for the NBA’s MVP Award in 1968. That same year, Wilkens was traded to the Seattle SuperSonics becoming a player-coach. He led the Sonics to their first winning season in 1971 and 1972. He ranked among the all-time leaders in assists, free throws, and was named MVP in the 1971 All-Star game. Wilkens left coaching to play with the Cleveland Cavaliers in 1972, and later became player-coach of the Portland Trail Blazers. In 1975, he retired from playing after fifteen seasons and remained as coach of the TrailBlazers for an additional season.

Wilkens returned to Seattle as head coach midway through the 1977 and 1978 season. He coached the Sonics to the NBA Finals that year. In his eight seasons with the Sonics, the team won its only NBA Championship in 1979, and compiled a record of 357-277 for a winning percentage 56.3. He served as the Sonic general manager for one season before accepting the head coach position for the Cleveland Cavaliers, where he coached for seven seasons. He later joined the Atlanta Hawks, coaching the team to the Central Division Championship and was named NBA Coach of the Year in 1994. Wilkens remained with the Atlanta Hawks organization until 2000, and left to coach the Toronto Raptors from 2000 to 2003, and the New York Knicks from 2004 to 2005. The following year, Wilkens was hired as vice chairman of the Seattle SuperSonics ownership group, and later became president of basketball operations. Wilkens retired from the organization in 2007.

Wilkens was the only person named one of the fifty greatest players and one of the top ten coaches in league history, and was inducted into the Naismith Hall of Fame as a player and a coach.

Wilkens and his wife, Marilyn have three children, Leesha, Randy and Jamee.

Lenny Wilkens was interviewed by The HistoryMakers on October 5, 2017.