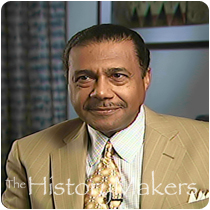 See how Lenny Springs is related to other HistoryMakers

Business executive and former member of the NAACP's national board, Lenny Fitzgerald Springs, was born on April 25, 1947, in Edgefield, South Carolina to Leonard Springs and Mildred Morgan. Graduating with a B.S. degree from Voorhees College in 1968, he began his career as project director of the Greenville, South Carolina Urban League from 1976 to 1979, and went on to serve as its deputy director from 1979 to 1982 and executive director from 1982 to 1983.

In 1983, he moved into a role as communication relations officer at Southern Bank, and in 1985, he joined First Union Corporation as senior vice president of the Corporate Relations Division. In April of 2002, after the merger of First Union and Wachovia Corporation the previous year, Wachovia named Springs as director of supplier diversity. In that role, he promotes public awareness and institutes progress programs for community advancement and community reinvestment. Springs has also worked on small and minority business and education advancement programs.

Involved in many other organizations, Springs serves on the board of directors of Boy Scouts Southern Region. He is vice chairman of the South Carolina Human Affairs Commission. Still active in the NAACP, he is chairman of its Special Contribution Fund Board of Trustees. He is past president, founder, and board member of the Charlotte, North Carolina Chapter of 100 Black Men of America. He has served on the boards of Central Carolina Urban League, the Southeast Regional National Alliance of Business, the Business Policy Review Council, Carolinas Minority Supplier Development Council, Inc., Florida Memorial College, Elizabeth City State University, South Carolina State University Foundation and Spirit Square. He is past president of the Voorhees College National Alumni Association and the National Urban Bankers Association, and has served on the board of visitors at Barber-Scotia College and Johnson C. Smith University.

Springs was named one of the Outstanding Young Men of America in 1973 and 1979 and received the NAACP’s Legal Award for South Carolina in 1980. The Greenville Branch of the NAACP honored him with an award in 1984. He also served as a sergeant in the United States Army for two years and received two Bronze Stars and an Air Medal for his acts of heroism in the line of duty.

See how Lenny Springs is related to other HistoryMakers
Click Here To Explore The Archive Today!