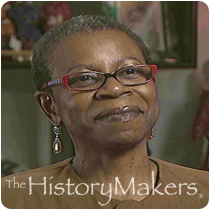 See how Lena Williams is related to other HistoryMakers

Retired senior writer for The New York Times, Lena Marguerite Williams was born on March 2, 1950 in Washington, D.C. The daughter of Ralph Williams and Lena M. Adams Williams, she was raised near the Howard Theatre on T Street. She attended Cleveland Elementary School, Garnet-Patterson Junior High School and started the school newspaper at Cardozo High School where she graduated in 1968. Matriculating to Howard University, Williams served as a sports reporter for The Hilltop and for Howard University’s radio station, WHUR-FM. She reported on Howard’s historic NCAA Division I Men’s Soccer Championship in 1971. Williams graduated cum laude with her B.A. degree in English in 1972 and spent that summer as an intern-reporter for The Washington Post. In 1973, she earned her M.S. degree from the Columbia University Graduate School of Journalism.

Before joining The New York Times, Williams was associate editor of Allen Barron and Dick Edward’s pioneering Black Sports magazine. She joined The New York Times as a clerk in the sports department in March of 1974, where she was mentored by Red Smith, Dave Anderson and Jim Tuitt. In August of 1976, she became a reporter trainee on the metropolitan desk. In 1977, Williams garnered the first of several Publishers Awards for her story on ten year old drug dealer in Harlem. That same year, Rosario et al. v. The New York Times , a minority employee initiated lawsuit, was settled by The New York Times for $1.8 million. In 1978, she transferred to the Westchester bureau as a correspondent. From 1980 to 1981, Williams was assigned to cover the state legislature in Albany, New York. In 1986, she was transferred to Washington, D.C. to establish a new civil rights beat. There, Williams covered the NAACP, the NAACP Legal Defense Fund and the nomination struggles of Judge Clarence Thomas. Williams became a lifestyles reporter in 1998, but eventually returned to sports reporting. Retiring from The New York Times in 2005, she moved back to her native Washington, D.C.

Williams was a Visiting Journalist Fellow at Duke University in 1993. In 1997, she was elected vice chair and later chair of the 1,500 member, New York Times Newspaper Guild. Williams is the recipient of many awards, including the Penney-Missouri Award. The National Association of Black Journalists presented her with the 1990 Award of Excellence. Williams received the Black Achievers Award from the YMCA in 1978. She is the author of It’s The Little Things: The Everyday Interactions That Get Under The Skin of Whites and Blacks, which was published by Harcourt in 2000. The book derived from a 1997 story that appeared in The New York Timesand was featured on ABC’s 20-20.

Williams is single and lives in Washington, D.C.

Williams was interviewed by The HistoryMakers on February 8, 2007.

See how Lena Williams is related to other HistoryMakers
Click Here To Explore The Archive Today!