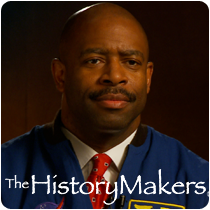 See how Leland Melvin is related to other HistoryMakers

From 1982 to 1985, Melvin was a wide receiver on the University of Richmond football team, where he became the all-time reception leader and was an Associated Press All-America selection in 1984 and 1985. The Detroit Lions selected Melvin in the eleventh round of the 1986 National Football League player draft. Several months later, he suffered a hamstring injury and was unable to fully recover. Melvin’s NASA career began in 1989 in the Fiber Optic Sensors group of the Nondestructive Evaluation Sciences Branch at NASA Langley Research Center, where he conducted research in the area of physical measurements for the development of advanced instrumentation for nondestructive evaluation. In 1994, Melvin was selected to lead the vehicle health monitoring team for the cooperative Lockheed/NASA X-33 Reusable Launch Vehicle program.

In 1998, Melvin was selected into the NASA Astronaut Corps. He flew into space twice on the
STS-122 in 2008 and STS-129 in 2009. Both missions were aboard the orbiter Atlantis. Melvin has logged more than 565 hours in space. Additionally, Melvin has served the Astronaut Office Space Station Operations Branch and the Robotics Branch of the Astronaut Office. In 2010, NASA Administrator Charles Bolden selected Melvin as the associate administrator for education. In this position, Melvin travels throughout the U.S. engaging thousands of students and teachers in the excitement of space exploration and inspiring them to pursue careers in science, technology, engineering and mathematics (STEM). Melvin was also selected to serve on the White House National Science and Technology Council’s Committee on Science, Technology, Engineering and Mathematics Education and is the U.S. representative on the International Space Education Board.

Melvin is a member of the American Chemical Society and the Society for Experimental Mechanics. He also holds honorary doctorates from Centre College, St Paul's College and Campbellsville University.

Leland D. Melvin was interviewed by The HistoryMakers on January 15, 2013.

See how Leland Melvin is related to other HistoryMakers
Click Here To Explore The Archive Today!