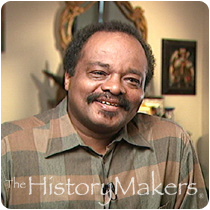 "They're All Wonderful 'Til They're Yours."

Hairstylist and salon owner Leigh Jones was born December 22, 1944, in Kansas City, Kansas. When Jones was four years old, his father died, and his mother moved the family to Chicago, Illinois. In Chicago, Jones attended Frank L. Gillespie Technology and Magnet Cluster, Park Manor Elementary School, Saint Columbanus School, and Charles S. Deneen Elementary School. His uncle owned Jimmy’s Restaurant on 63rd Street, where Jones enjoyed listening to the older people tell stories. He graduated from Westcott Vocational High School (now Simeon Vocational) in 1960. Jones attended the University of Illinois at Chicago, Roosevelt University and Loop College before enrolling in the American School of Beauty Culture in 1962. He was one of the first black students to attend the school, and was influenced by Bernice Van Dessell. Jones graduated from the American School of Beauty Culture and was licensed in 1964. He also attended Revlon Color Institute, the L’Oreal Institute, Pivot Point International, Clairol Color Academy, and the Southern Illinois School of Continuing Education.

In 1963, Jones became the first African American to work for Jean Luc Vercammen; he began working at Carrie’s Chateau and at Frederick Glasser’s Cheers and Shears Salon in 1964. During his career, he worked with Darrell Whitten, Inc., Maximo Salon and Jean Pierre Salon before opening his own salon in 1983. During this period, he was also the stylist for A. M. Chicago host, Oprah Winfrey. Jones became the hairstylist of choice for many well known clients including Lainie Kazan, Lena Horne, Eunice Johnson, Dori Wilson, Heather Bilandic, Beverly Crown, Diahann Carroll, Natalie Cole, Marlo Thomas, Barbara Eden, Billy Dee Williams, Debra Norville, Phyllis Newman, and Essie Kupcinet. He is known for treating all of his clients with the same high standard of courtesy.

Jones has been a commercial hairstylist for Johnson Products, Alberto-Culver, Helene Curtis, Revlon and Clairol, as well as for television specials and Broadway shows. He is the chair and judge of the Gold Trophy and Silver Shopping Competition for the Midwest Beauty Show; he is also a board member of the Chicago Cosmetologist Association, Mid-American Art Association, Bike and Hike for Multiple Sclerosis, and the 10th Annual Chicago House Benefit for AIDS. Living near many of his clients in Chicago’s Gold Coast, Jones enjoys the positive feedback he gets from his work and watching football.
Leigh Jones was interviewed by The HistoryMakers on September 15, 2004.