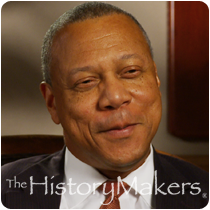 "You Got To Have A Program."

Engineer and academic administrator Legand Burge, Jr. was born on August 3, 1949 in Oklahoma City, Oklahoma. His parents, Bobbie and Legand Burge, Sr., had a profound impact on their children’s lives. Burge’s father, an electronics radar technician by background, served in the U.S. Navy during World War II and rose to the rank of master sergeant in the U.S. Air Force after the war, and continued to work with radar technology for the Federal Aviation Administration. Burge excelled in math and science during elementary school, and upon graduating from Oklahoma City Douglass High School in 1965, he was offered a scholarship to study at Oklahoma State University, where he earned his B.S. degree in electrical engineering in 1971. During college, Burge held internships with Oklahoma Gas and Electric. He considered establishing a career there, but through his acceptance to the Air Force Institute of Technology, he earned his M.S. degree in 1973. He was then assigned to work at the Sunnyvale Air Force Base in California with the National Reconnaissance Office. After four years of service, Burge returned to Oklahoma State University to study under Dr. Rao Yarlagadda, earning his Ph.D. degree in electrical engineering in 1979.

Burge’s career has focused on information theory, coding theory, digital signal processing, and communications—areas of research that had become very popular during the 1970s and 1980s with the rise of both commercial technology and the military needs of the Cold War. Burge taught at the Air Force Academy before being selected to serve in the Intermediate Service School at the Air Command and Staff College. Shortly after, he was invited to work at the Pentagon under General Colin Powell’s supervision. Burge was assigned to the research and development group of the air staff’s International Program. In 1987, Burge became a lead researcher at the National Security Agency and later returned to the Pentagon, working as a cost estimator for the defense secretary. Burge retired from the military in 1999 after having served as vice commander of the entire Air Force ROTC program and the dean of the Acquisition Management School at the Defense Systems Management College. He was subsequently named a professor of electrical engineering and Dean of the College of Engineering, Architecture, and Physical Sciences at Tuskegee University.

Burge has been recognized for his administrative and research capabilities throughout his career. He was elected to the American Society of Engineering Education Executive Board in 2005. He has also worked with his son, Legand Burge, III to operate LL Burge & Associates, a consulting firm that addresses information technology needs.

Burge is the father of three adult children: Legand Burge, III, LeAnn Crisp, and Lamuelle Burge, and the step-father of Louis Burge.

Legand Burge, Jr. was interviewed by The HistoryMakers on April 11, 2011.