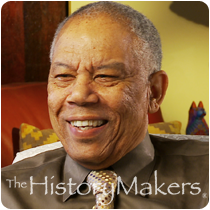 See how Lee Ransaw is related to other HistoryMakers

Fine artist and art professor Lee Ransaw, was born on March 24, 1938, in Little Rock, Arkansas, to Sylvia and Lee Lester. In 1955, Ransaw received his high school diploma from Shortridge High School in Indianapolis, Indiana. He later attended Indiana University in Bloomington, Indiana where he earned his B.A. degree in art education in 1962 and his M.A. degree in fine arts in 1966. In 1973, Ransaw received his Ed.D. degree from Illinois State University.

While Ransaw was a graduate student at Illinois State University, he travelled to Nashville, Tennessee where he met artist and scholar David Driskell. This visit inspired Ransaw to begin collecting artwork for his private art collection. After taking courses at Pratt Institute in New York, Ransaw moved to Atlanta, Georgia, where he taught African art and Afro-American art at Emory University. In 1979, Ransaw was hired at Morris Brown College as an art professor where he painted the Centennial Mural which depicted the history of the college. The mural was considered to be a national project and was commissioned by the Atlanta Coca Cola Bottling Company. In 2002, Ransaw along with Lamar Wilson, director of Ruth Hall Hodges Art Gallery, founded The National Alliance of Artists from Historically Black Colleges and Universities (NAAHBCU) on the campus of Morris Brown College. Ransaw, then dean of arts and letters, and chair of the fine art department at the college, initially held a statewide exhibit that featured the artwork of the art faculty from Georgia based HBCUs. NAAHBCU held its first major traveling exhibition entitled Visions From Within at the James Kemp Gallery at The Black Academy of Arts & Letters in Dallas, Texas and featured thirty artists. In 2004, Ransaw was hired as an adjunct art professor at Spelman College in Atlanta, Georgia. Ramsaw retired as president of NAAHBCU in 2010 and served as chairman of the organization.

Among his many honors and awards were The Distinguished United Negro College Fund Scholars Award in Washington, D.C., The Rockefeller Foundation Fellowship to the Metropolitan Museum of Art in New York, The Ford Foundation Fellowship, and a Bronze Jubilee Award for artistic achievement given by PBS in Atlanta, Georgia.

Lee Ransaw was interviewed by The HistoryMakers on April, 19, 2011.

See how Lee Ransaw is related to other HistoryMakers
Click Here To Explore The Archive Today!